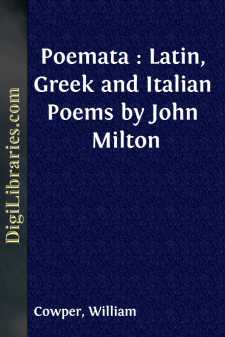 Complimentary Pieces Addressed to the Author.

1Well as the author knows that the following testimonies are not so much about as above him, and that men of great ingenuity, as well as our friends, are apt, through abundant zeal, so to praise us as rather to draw their own likeness than ours, he was yet unwilling that the world should remain always ignorant of compositions that do him so much honour; and especially because he has other friends, who have, with much importunity, solicited their publication. Aware that excessive commendation awakens envy, he would with both hands thrust it from him, preferring just so much of that dangerous tribute as may of right belong to him; but at the same time he cannot deny that he sets the highest value on the suffrages of judicious and distinguished persons.

1 These complimentary pieces have been sufficiently censured by a great authority, but no very candid judge either of Milton or his panegyrists. He, however, must have a heart sadly indifferent to the glory of his country, who is not gratified by the thought that she may exult in a son whom, young as he was, the Learned of Italy thus contended to honour.—W.C.

The Neapolitan, Giovanni Battista Manso, Marquis of Villa,         to the Englishman, John Milton.

What features, form, mien, manners, with a mindOh how intelligent, and how refined!Were but thy piety from fault as free,Thou wouldst no Angle1 but an Angel be.

1 The reader will perceive that the word "Angle" (i.e. Anglo- Saxon) is essential, because the epigram turns upon it.—W.C.

An Epigram Addressed to the Englishman, John Milton, a PoetWorthy of the Three Laurels of Poesy, the Grecian, Latin, andEtruscan, by Giovanni Salzilli of Rome

Meles1 and Mincio both your urns depress!Sebetus, boast henceforth thy Tasso less!But let the Thames o'erpeer all floods, since he,For Milton famed, shall, single, match the three.

1 Meles is a river of Ionia, in the neighborhood of Smyrna, whenceHomer is called Melesigenes.  The Mincio watered the city of Mantua famous as the birthplaceof Virgil.  Sebetus is now called the Fiume della Maddalena—it runs throughNaples.—W.C.

Exalt Me, Clio,1 to the skies,     That I may form a starry crown,     Beyond what Helicon supplies     In laureate garlands of renown;To nobler worth be brighter glory given,And to a heavenly mind a recompense from heaven.

Time's wasteful hunger cannot prey     On everlasting high desert,     Nor can Oblivion steal away     Its record graven on the heart;Lodge but an arrow, Virtue, on the bowThat binds my lyre, and death shall be a vanquished foe.

In Ocean's blazing flood enshrined.     Whose vassal tide around her swells,     Albion....