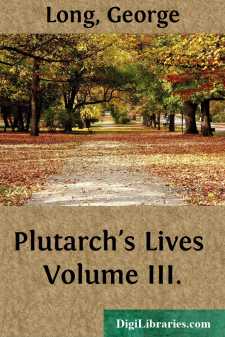 As it appears to me that the life of Nikias forms a good parallel to that of Crassus, and that the misfortunes of the former in Sicily may be well compared with those of the latter in Parthia, I must beg of my readers to believe that in writing upon a subject which has been described by Thucydides with inimitable grace, clearness, and pathos, I have no ambition to imitate Timæus, who, when writing his history, hoped to surpass Thucydides himself in eloquence, and to show that Philistius was but an ignorant bungler, and so plunges into an account of the speeches and battles of his heroes, proving himself not merely one

"Who toils on foot afarBehind the Lydian car,"

as Pindar has it, but altogether unfit for the office of historian, and, in the words of Diphilus,

"Dull-witted, with Sicilian fat for brains."

He often seeks to shelter himself behind the opinions of Xenarchus, as when he tells us that the Athenians thought it a bad omen that the general whose name was Victory refused to command the expedition to Sicily; and when he says that by the mutilation of the Hennas the gods signified that the Athenians would suffer their chief disasters at the hands of Hermokrates the son of Hermon; or, again, when he observes that Herakles might be expected to take the side of the Syracusans because of Proserpine, the daughter of Demeter, who gave him the dog Kerberus, and to be angry with the Athenians because they protected the people of Egesta, who were descended from the Trojans, whereas he had been wronged by Laomedon, king of Troy, and had destroyed that city. Timæus was probably led to write this sort of nonsense by the same critical literary spirit which led him to correct the style of Philistius, and to find fault with that of Aristotle and Plato. My own opinion is that to pay too much attention to mere style and to endeavour to surpass that of other writers, is both trifling and pedantic, while any attempt to reproduce that of the unapproachable masterpieces of antiquity springs from a want of power to appreciate their real value. With regard, then, to the actions of Nikias described by Thucydides and Philistius, more especially those which illustrate his true character, having been performed under the stress of terrible disasters, I shall briefly recapitulate them, lest I be thought a careless biographer, adding to them whatever scattered notices I have been able to collect from the writings of other historians and from public documents and inscriptions; and of these latter I shall quote only those which enable us to judge what manner of man he was.

II. The first thing to be noted in describing Nikias is the saying of Aristotle, that there had been in Athens three citizens of great ability and patriotism, namely, Nikias, the son of Nikeratus, Thucydides, the son of Melesias, and Theramenes, the son of Hagnon; though the latter was not equal to the two former, but was reproached with being a foreigner from the island of Keos; and, also, because he was not a stable politician but always inclined to change sides, he was nicknamed Kothornos, which means a large boot which will fit either leg. Of these three statesmen the eldest was Thucydides, who was the leader of the conservative opposition to Perikles; while Nikias, who was a younger man, rose to a certain eminence during the life of Perikles, as he acted as his colleague in the command of a military force, and also filled the office of archon. On the death of Perikles, Nikias at once became the foremost man in Athens, chiefly by the favour of the rich and noble, who wished to make use of him to check the plebeian insolence of Kleon; yet Nikias had the good-will of the common people, and they were eager to further his interests. Kleon, indeed, became very powerful by caressing the people and giving them opportunities for earning money from the State, but in spite of this, many of the lower classes whose favour he especially strove to obtain, became disgusted with, his greed and insolence, and preferred to attach themselves to Nikias. Indeed, there was nothing harsh or overbearing in the pride of Nikias, which arose chiefly from his fear of being thought to be currying favour with the people. By nature he was downhearted and prone to despair, but in war these qualities were concealed by his invariable success in whatever enterprise he undertook; while in political life his retiring manner and his dread of the vulgar demagogues, by whom he was easily put out of countenance, added to his popularity; for the people fear those who treat them with haughtiness, and favour those who respect and fear them....