Play-Making A Manual of Craftsmanship 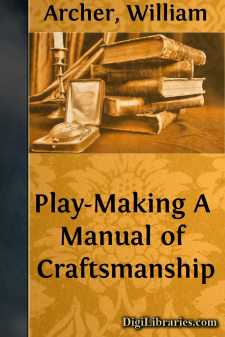 There are no rules for writing a play. It is easy, indeed, to lay down negative recommendations--to instruct the beginner how not to do it. But most of these "don'ts" are rather obvious; and those which are not obvious are apt to be questionable. It is certain, for instance, that if you want your play to be acted, anywhere else than in China, you must not plan it in sixteen acts of an hour apiece; but where is the tyro who needs a text-book to tell him that? On the other hand, most theorists of to-day would make it an axiom that you must not let your characters narrate their circumstances, or expound their motives, in speeches addressed, either directly to the audience, or ostensibly to their solitary selves. But when we remember that, of all dramatic openings, there is none finer than that which shows Richard Plantagenet limping down the empty stage to say--  "Now is the winter of our discontent  Made glorious summer by this sun of York;  And all the clouds that lour'd upon our house  In the deep bosom of the ocean buried"--we feel that the axiom requires large qualifications. There are no absolute rules, in fact, except such as are dictated by the plainest common sense. Aristotle himself did not so much dogmatize as analyse, classify, and generalize from, the practices of the Attic dramatists. He said, "you had better" rather than "you must." It was Horace, in an age of deep dramatic decadence, who re-stated the pseudo-Aristotelian formulas of the Alexandrians as though they were unassailable dogmas of art.

How comes it, then, that there is a constant demand for text-books of the art and craft of drama? How comes it that so many people--and I among the number--who could not write a play to save their lives, are eager to tell others how to do so? And, stranger still, how comes it that so many people are willing to sit at the feet of these instructors? It is not so with the novel. Popular as is that form of literature, guides to novel-writing, if they exist at all, are comparatively rare. Why are people possessed with the idea that the art of dramatic fiction differs from that of narrative fiction, in that it can and must be taught?

The reason is clear, and is so far valid as to excuse, if not to justify, such works as the present. The novel, as soon as it is legibly written, exists, for what it is worth. The page of black and white is the sole intermediary between the creative and the perceptive brain. Even the act of printing merely widens the possible appeal: it does not alter its nature. But the drama, before it can make its proper appeal at all, must be run through a highly complex piece of mechanism--the theatre--the precise conditions of which are, to most beginners, a fascinating mystery. While they feel a strong inward conviction of their ability to master it, they are possessed with an idea, often exaggerated and superstitious, of its technical complexities. Having, as a rule, little or no opportunity of closely examining or experimenting with it, they are eager to "read it up," as they might any other machine. That is the case of the average aspirant, who has neither the instinct of the theatre fully developed in his blood, nor such a congenital lack of that instinct as to be wholly inapprehensive of any technical difficulties or problems. The intelligent novice, standing between these extremes, tends, as a rule, to overrate the efficacy of theoretical instruction, and to expect of analytic criticism more than it has to give.

There is thus a fine opening for pedantry on the one side, and quackery on the other, to rush in. The pedant, in this context, is he who constructs a set of rules from metaphysical or psychological first principles, and professes to bring down a dramatic decalogue from the Sinai of some lecture-room in the University of Weissnichtwo. The quack, on the other hand, is he who generalizes from the worst practices of the most vulgar theatrical journeymen, and has no higher ambition than to interpret the oracles of the box-office. If he succeeded in so doing, his function would not be wholly despicable; but as he is generally devoid of insight, and as, moreover, the oracles of the box-office vary from season to season, if not from month to month, his lucubrations are about as valuable as those of Zadkiel or Old Moore.

What, then, is the excuse for such a discussion as is here attempted? Having admitted that there are no rules for dramatic composition, and that the quest of such rules is apt to result either in pedantry or quackery, why should I myself set forth upon so fruitless and foolhardy an enterprise? It is precisely because I am alive to its dangers that I have some hope of avoiding them. Rules there are none; but it does not follow that some of the thousands who are fascinated by the art of the playwright may not profit by having their attention called, in a plain and practical way, to some of its problems and possibilities. I have myself felt the need of some such handbook, when would-be dramatists have come to me for advice and guidance. It is easy to name excellent treatises on the drama; but the aim of such books is to guide the judgment of the critic rather than the creative impulse of the playwright. There are also valuable collections of dramatic criticisms; but any practical hints that they may contain are scattered and unsystematic. On the other hand, the advice one is apt to give to beginners--"Go to the theatre; study its conditions and mechanism for yourself"--is, in fact, of very doubtful value. It might, in many cases, be wiser to warn the aspirant to keep himself unspotted from the playhouse. To send him there is to imperil, on the one hand, his originality of vision, on the other, his individuality of method. He may fall under the influence of some great master, and see life only through his eyes; or he may become so habituated to the current tricks of the theatrical trade as to lose all sense of their conventionality and falsity, and find himself, in the end, better fitted to write what I have called a quack handbook than a living play. It would be ridiculous, of course, to urge an aspirant positively to avoid the theatre; but the common advice to steep himself in it is beset with dangers.

It may be asked why, if I have any guidance and help to give, I do not take it myself, and write plays instead of instructing others in the art. This is a variant of an ancient and fallacious jibe against criticism in general. It is quite true that almost all critics who are worth their salt are "stickit" artists. Assuredly, if I had the power, I should write plays instead of writing about them; but one may have a great love for an art, and some insight into its principles and methods, without the innate faculty required for actual production. On the other hand, there is nothing to show that, if I were a creative artist, I should be a good mentor for beginners. An accomplished painter may be the best teacher of painters; but an accomplished dramatist is scarcely the best guide for dramatists. He cannot analyse his own practice, and discriminate between that in it which is of universal validity, and that which may be good for him, but would be bad for any one else. If he happened to be a great man, he would inevitably, even if unconsciously, seek to impose upon his disciples his individual attitude towards life; if he were a lesser man, he would teach them only his tricks....