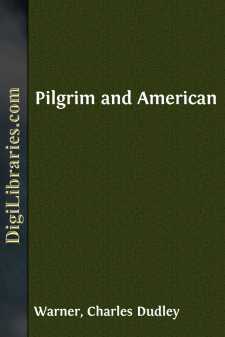 This December evening, the imagination, by a law of contrast, recalls another December night two hundred and seventy years ago. The circle of darkness is drawn about a little group of Pilgrims who have come ashore on a sandy and inhospitable coast. On one side is a vexed and wintry sea, three thousand miles of tossing waves and tempest, beyond which lie the home, the hedgerows and cottages, the church towers, the libraries and universities, the habits and associations of an old civilization, the strongest and dearest ties that can entwine around a human heart, abandoned now definitely and forever by these wanderers; on the other side a wintry forest of unknown extent, without highways, the lair of wild beasts, impenetrable except by trails known only to the savages, whose sudden appearance and disappearance adds mystery and terror to the impression the imagination has conjured up of the wilderness.

This darkness is symbolic. It stands for a vaster obscurity. This is an encampment on the edge of a continent, the proportions of which are unknown, the form of which is only conjectured. Behind this screen of forest are there hills, great streams, with broad valleys, ranges of mountains perhaps, vast plains, lakes, other wildernesses of illimitable extent? The adventurers on the James hoped they could follow the stream to highlands that looked off upon the South Sea, a new route to India and the Spice Islands. This unknown continent is attacked, it is true, in more than one place. The Dutch are at the mouth of the Hudson; there is a London company on the James; the Spaniards have been long in Florida, and have carried religion and civilization into the deserts of New Mexico. Nevertheless, the continent, vaster and more varied than was guessed, is practically undiscovered, untrodden. How inadequate to the subjection of any considerable portion of it seems this little band of ill-equipped adventurers, who cannot without peril of life stray a league from the bay where the "Mayflower" lies.

It is not to be supposed that the Pilgrims had an adequate conception of the continent, or of the magnitude of their mission on it, or of the nation to come of which they were laying the foundations. They did the duty that lay nearest to them; and the duty done today, perhaps without prescience of its consequences, becomes a permanent stone in the edifice of the future. They sought a home in a fresh wilderness, where they might be undisturbed by superior human authority; they had no doctrinarian notions of equality, nor of the inequality which is the only possible condition of liberty; the idea of toleration was not born in their age; they did not project a republic; they established a theocracy, a church which assumed all the functions of a state, recognizing one Supreme Power, whose will in human conduct they were to interpret. Already, however, in the first moment, with a true instinct of self-government, they drew together in the cabin of the "Mayflower" in an association—to carry out the divine will in society. But, behold how speedily their ideas expanded beyond the Jewish conception, necessarily expanded with opportunity and the practical self-dependence of colonies cut off from the aid of tradition, and brought face to face with the problems of communities left to themselves. Only a few years later, on the banks of the Connecticut, Thomas Hooker, the first American Democrat, proclaimed that "the foundation of authority is laid in the free consent of the people," that "the choice of public magistrates belongs unto the people, by God's own allowance," that it is the right of the people not only to choose but to limit the power of their rulers, and he exhorted, "as God has given us liberty to take it." There, at that moment, in Hartford, American democracy was born; and in the republican union of the three towns of the Connecticut colony, Hartford, Windsor, and Wethersfield, was the germ of the American federal system, which was adopted into the federal constitution and known at the time as the "Connecticut Compromise."

It were not worth while for me to come a thousand miles to say this, or to draw over again for the hundredth time the character of the New England Pilgrim, nor to sketch his achievement on this continent....