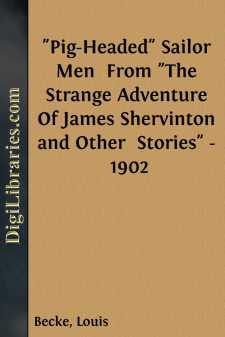 Crossing from Holyhead to Ireland one night the captain of the steamer and myself, during an hour's talk on the bridge, found that we each had sailed in a certain Australian coasting steamer more than twenty years before—he as chief officer and I as passenger; and her shipwreck one Christmas Eye (long after), which was attended by an appalling loss of life, led us to talk of "pig-headed" skippers generally. His experiences were large, and some of his stories were terrible even to hear, others were grotesquely humorous, and the memory of that particularly pleasant passage across a sea as smooth as a mill pond, has impelled me to retell some of the incidents I related to him of my own adventures with obstinate, self-willed, or incapable captains.

My first experience was with a gentleman of the "incapable" variety, and befell me when I was quite a lad. I had taken my passage in a very smart little Sydney (N.S.W.) barque bound for Samoa via the Friendly Islands. She was commanded by a Captain Rosser, who had sailed her for nearly twenty years in the South Sea trade, and who was justly regarded as the doyen of island skippers. He was a "Bluenose," stood six feet two in his stockinged feet, and was a man of the most determined courage, unflinching resolution, and was widely known and respected by the white traders and the natives all over the South Pacific.

In those days there was quite a fleet of vessels engaged in the South Sea trade, and most of them were owned in, and sailed from Sydney, and I could have secured a passage in any one of three other vessels, but preferred the Rimitara (so I will call her), merely because the agent had told me that no other passengers were going by her. Captain Rosser himself frankly told me that he did not like passengers, but when he learned that I had been to sea before, and intended settling in Samoa as a trader, his grim visage relaxed, and he growled something about my finding the accommodation ample enough, as I was to be the only passenger.

The Rimitara was lying off Garden Island, and as she was to sail at eleven in the morning I went on board at ten with the captain himself. Just ahead of the barque was a very handsome brigantine, also bound for the Friendly Islands. She had been launched only a few weeks previously, and had been built for His Majesty King George of Tonga, at a cost of £4,000, as a combined cargo and despatch vessel. As Rosser and I stepped on the barque's poop the captain of the brigantine—whose decks were crowded with visitors—hailed the former and challenged him to a race.

"Oh, race with yourself, sir," was Rosser's abrupt reply, as he bade his chief mate heave up, and then seeing that a number of ladies were standing beside the captain of the brigantine, he raised his hat, and added more good-humouredly that although the Rimitara was not a yacht like the Tuitoga, he would bet the captain of the latter ten pounds that the barque would be at anchor in Nukualofa Harbour forty-eight hours before him.

"Make it fifty," cried the master of the new ship, amid the cheers of his guests.

Rosser shook his head, and replied with apparent unconcern (though he was really angry) that ten pounds was enough for any one to lose. "But," he added, "don't think I'm going to race you. I'm just going to dodder along as usual." (He kept his word most thoroughly.)

We got underway first, and were just passing out between Sydney Heads under easy sail, when the brigantine overtook us, and passed us like a race-horse galloping past a trotting donkey. She presented a beautiful sight as she swept by with yards braced up sharp to a good south-east breeze, and every stitch of her brand-new canvas drawing. One of the officers had the bad manners to take up a coil of small line, and make a pretence of heaving it to us for a tow rope....