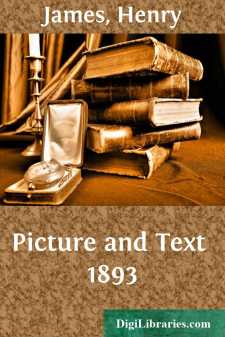 If there be nothing new under the sun there are some things a good deal less old than others. The illustration of books, and even more of magazines, may be said to have been born in our time, so far as variety and abundance are the signs of it; or born, at any rate, the comprehensive, ingenious, sympathetic spirit in which we conceive and practise it.

If the centuries are ever arraigned at some bar of justice to answer in regard to what they have given, of good or of bad, to humanity, our interesting age (which certainly is not open to the charge of having stood with its hands in its pockets) might perhaps do worse than put forth the plea of having contributed a fresh interest in "black and white." The claim may now be made with the more confidence from the very evident circumstance that this interest is far from exhausted. These pages are an excellent place for such an assumption. In Harper they have again and again, as it were, illustrated the illustration, and they constitute for the artist a series of invitations, provocations and opportunities. They may be referred to without arrogance in support of the contention that the limits of this large movement, with all its new and rare refinement, are not yet in sight.

It is on the contrary the constant extension that is visible, with the attendant circumstances of multiplied experiment and intensified research—circumstances that lately pressed once more on the attention of the writer of these remarks on his finding himself in the particular spot which history will perhaps associate most with the charming revival. A very old English village, lying among its meadows and hedges, in the very heart of the country, in a hollow of the green hills of Worcestershire, is responsible directly and indirectly for some of the most beautiful work in black and white with which I am at liberty to concern myself here; in other words, for much of the work of Mr. Abbey and Mr. Alfred Parsons. I do not mean that Broadway has told these gentlemen all they know (the name, from which the American reader has to brush away an incongruous association, may as well be written first as last); for Mr. Parsons, in particular, who knows everything that can be known about English fields and flowers, would have good reason to insist that the measure of his large landscape art is a large experience. I only suggest that if one loves Broadway and is familiar with it, and if a part of that predilection is that one has seen Mr. Abbey and Mr. Parsons at work there, the pleasant confusion takes place of itself; one's affection for the wide, long, grass-bordered vista of brownish gray cottages, thatched, latticed, mottled, mended, ivied, immemorial, grows with the sense of its having ministered to other minds and transferred itself to other recipients; just as the beauty of many a bit in many a drawing of the artists I have mentioned is enhanced by the sense, or at any rate by the desire, of recognition. Broadway and much of the land about it are in short the perfection of the old English rural tradition, and if they do not underlie all the combinations by which (in their pictorial accompaniments to rediscovered ballads, their vignettes to story or sonnet) these particular talents touch us almost to tears, we feel at least that they would have sufficed: they cover the scale.