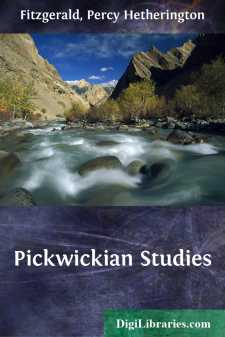 This ancient Inn is associated with some pleasant and diverting Pickwickian memories.  We think of the adventure with “the lady in the yellow curl papers” and the double-bedded room, just as we would recall some “side splitting” farce in which Buckstone or Toole once made our jaws ache.  As all the world knows, the “Great White Horse” is found in the good old town of Ipswich, still flourishes, and is scarcely altered from the days when Mr. Pickwick put up there.  Had it not been thus associated, Ipswich would have remained a place obscure and scarcely known, for it has little to attract save one curious old house and some old churches; and for the theatrical antiquary, the remnant of the old theatre in Tacket Street, where Garrick first appeared as an amateur under the name of Lyddal, about a hundred and sixty years ago, and where now the Salvation Army “performs” in his stead.   The touch of “Boz” kindled the old bones into life, it peopled the narrow, winding streets with the Grummers, Nupkins, Jingles, Pickwick and his followers; with the immortal lady aforesaid in her yellow curl papers, to say nothing of Mr. Peter Magnus.  From afar off even, we look at Ipswich with a singular interest; some of us go down there to enjoy the peculiar feeling—and it is a peculiar and piquant one—of staying at Mr. Pickwick’s Inn—of sleeping even in his room.  This relish, however, is only given to your true “follower,” not to his German-metal counterfeit—though, strange to say, at this moment, Pickwick is chiefly “made in Germany,” and comes to us from that country in highly-coloured almanacks—and pictures of all kinds.  About Ipswich there is a very appropriate old-fashioned tone, and much of the proper country town air.  The streets seem dingy enough—the hay waggon is encountered often.  The “Great White Horse,” which is at the corner of several streets, is a low, longish building—with a rather seedy air.  But to read “Boz’s” description of it, we see at once that he was somewhat overpowered by its grandeur and immense size—which, to us in these days of huge hotels, seems odd.  It was no doubt a large posting house of many small chambers—and when crowded, as “Boz” saw it at Election time in 1835, swarming with committeemen, agents, and voters, must have impressed more than it would now.  The Ball-room at “The Bull,” in Rochester, affected him in much the same way; and there is a curious sensation in looking round us there, on its modest proportions—its little hutch of a gallery which would hold about half-a-dozen musicans, and the small contracted space at the top where the “swells” of the dockyard stood together.  “Boz,” as he himself once told me, took away from Rochester the idea that its old, red brick Guildhall was one of the most imposing edifices in Europe, and described his astonishment on his return at seeing how small it was.

Apropos of Rochester and the Pickwick feeling, it may be said that to pass that place by on the London, Chatham, and Dover line rouses the most curious sensation.  Above is the Castle, seen a long time before, with the glistening river at its feet; then one skirts the town passing by the backs of the very old-fashioned houses, and you can recognise those of the Guildhall and of the Watts’ Charity, and the gilt vanes of other quaint, old buildings; you see a glimpse of the road rising and falling, with its pathways raised on each side, with all sorts of faded tints—mellow, subdued reds, sombre greys, a patch of green here and there, and all more or less dingy, and “quite out of fashion.”  There is a rather forlorn tone over it all, especially when we have a glimpse of Ordnance Terrace, at Chatham, that abandoned, dilapidated row where the boy Dickens was brought up dismally enough.  At that moment the images of the Pickwickians recur as of persons who had lived and had come down there on this pleasant adventure.  And how well we know every stone and corner of the place, and the tone of the place!  We might have lived there ourselves.  Positively, as we walk through it, we seem to recognise localities like old friends....