Picked up at Sea The Gold Miners of Minturne Creek 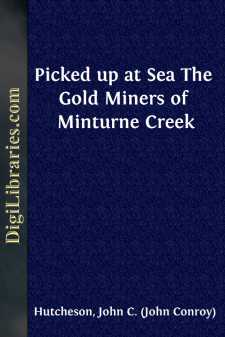 The Gold-Miners of Minturne Creek. The “Susan Jane.”

“Looks like a ship’s mast, with the yard attached, and a man a-holding on to it and hailing us for help—leastways, that’s what it seems to me!”

“Jerusalem! On the weather-bow, you say? Can we forereach him on this tack?”

“I reckon we can jist about do it, boss, if you put the helm up a bit kinder nearer the wind,” drawled out the lookout from his post of observation in the main-top, where he had stopped a moment on catching sight of the object floating in the water ahead of the vessel, as he was coming down from aloft after restowing the bunt of the main-topgallantsail that had blown loose from its lashings.

The Susan Jane of and for Boston, Massachusetts, with a cargo from London, had been caught at the outset of her passage across the Atlantic by what her American skipper termed “a pretty considerable gale of wind;” and she now lay tossing about amid the broken waves of the boisterous Bay of Biscay, on the morning after the tempest, the full force of which she had fortunately escaped, trying to make some headway under her jib, close-reefed topsails, and storm staysails, with a bit of her mainsail set to steady her, half brailed up—although the task was difficult, with a nasty chopping cross-sea and an adverse wind.

The vessel had recently passed a lot of wreckage, that betokened they were not far from the spot where some ship, less lucky than themselves, had been overwhelmed by the treacherous waters of the ill-fated bay; and the news that a waif was now in sight, supporting a stray survivor, affected all hearts on board, and roused their sympathies at once.

The captain of the New England barque had already adjusted the telescope, that he carried in true sailor fashion tucked under his left arm, to his “weather-eye,” and was looking eagerly in the direction pointed out by the seaman, before he received the answer from aloft to his second hail. But he could not as yet see what the lookout had discovered, from the fact of the waves being still high and his place of outlook from the deck lower than the other’s.

“Are you certain, Tom, you see some one?” he called out again, after a moment’s pause, during which he narrowly scanned the uneven surface of the sea.

“Yes, sure,” was the confident reply. “As sartain as there’s snakes in Virginny!”

“Still in the same direction?”

“Ha! I see him at last!” exclaimed the skipper, clambering up from the deck, and supporting himself by holding on to the mizzen-rigging as he stood on the taffrail and peered forward along the ship’s side, to where he could now notice the floating object ahead, almost in the wind’s-eye.

“Luff, you beggar, luff!” he added, to the steersman, who, with both hands on the wheel, was exerting all his strength to keep the vessel’s head up.

“She can’t do it, sir,” replied the sailor, hoarsely. “It’s all I can manage to prevent her falling off now.”