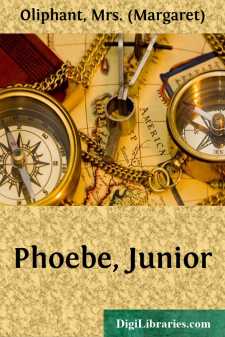 CHAPTER I. THE PASTOR'S PROGRESS.

Miss Phœbe Tozer, the only daughter of the chief deacon and leading member of the Dissenting connection in Carlingford, married, shortly after his appointment to the charge of Salem Chapel, in that town, the Reverend Mr. Beecham, one of the most rising young men in the denomination. The marriage was in many ways satisfactory to the young lady's family, for Mr. Beecham was himself the son of respectable people in a good way of business, and not destitute of means; and the position was one which they had always felt most suitable for their daughter, and to which she had been almost, it may be said, brought up. It is, however, scarcely necessary to add that it was not quite so agreeable to the other leading members of the congregation. I should be very sorry to say that each family wished that preferment for its own favourite daughter; for indeed there can be no doubt, as Mrs. Pigeon asserted vigorously, that a substantial grocer, whose father before him had established an excellent business, and who had paid for his pew in Salem as long as any one could recollect, and supported every charity, and paid up on all occasions when extra expense was necessary, was in every way a more desirable son-in-law than a poor minister who was always dependent on pleasing the chapel folks, and might have to turn out any day. Notwithstanding, however, the evident superiority of the establishment thus attained by Maria Pigeon, there is a certain something attached to the position of a clerical caste, even among such an independent body as the congregation at Salem Chapel, which has its own especial charms, and neither the young people who had been her companions nor the old people who had patronized and snubbed her, felt any satisfaction in seeing Phœbe thus advanced over them to the honours and glories inalienable from the position of minister's wife. All her little airs of bridal vanity were considered as so many offensive manifestations of delight and exultation in her rise in life. Her trousseau, though pronounced by all competent judges not half so abundant or fine as Maria Pigeon's, still called forth comments which nobody ventured to indulge in, in respect to the grocer's blooming bride. A grocer's lady has a right to anything her parents can afford; but to see a minister's wife swelling herself up, and trying to ape the quality, filled the town with virtuous indignation. The sight of young Mrs. Beecham walking about with her card-case in her hand, calling on the Miss Hemmingses, shaking hands with Mrs. Rider the doctor's wife, caused unmitigated disgust throughout all the back streets of Carlingford; and “that Phœbe a-sweeping in as if the chapel belonged to her,” was almost more than the oldest sitter could bear. Phœbe, it must be added, felt her elevation to the full, and did not spare her congregation. Sometimes she would have the audacity to walk from the vestry to the pew, as if she were an office-bearer, instead of coming in humbly by the door as became a woman....