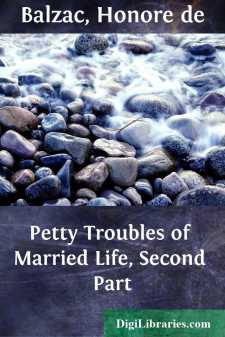 If, reader, you have grasped the intent of this book,—and infinite honor is done you by the supposition: the profoundest author does not always comprehend, I may say never comprehends, the different meanings of his book, nor its bearing, nor the good nor the harm it may do—if, then, you have bestowed some attention upon these little scenes of married life, you have perhaps noticed their color—

"What color?" some grocer will doubtless ask; "books are bound in yellow, blue, green, pearl-gray, white—"

Alas! books possess another color, they are dyed by the author, and certain writers borrow their dye. Some books let their color come off on to others. More than this. Books are dark or fair, light brown or red. They have a sex, too! I know of male books, and female books, of books which, sad to say, have no sex, which we hope is not the case with this one, supposing that you do this collection of nosographic sketches the honor of calling it a book.

Thus far, the troubles we have described have been exclusively inflicted by the wife upon the husband. You have therefore seen only the masculine side of the book. And if the author really has the sense of hearing for which we give him credit, he has already caught more than one indignant exclamation or remonstrance:

"He tells us of nothing but vexations suffered by our husbands, as if we didn't have our petty troubles, too!"

It would therefore be signally unjust to lay upon you alone the reproaches that every being brought under the yoke (conjugium) has the right to heap upon that necessary, sacred, useful, eminently conservative institution,—one, however, that is often somewhat of an encumbrance, and tight about the joints, though sometimes it is also too loose there.

I will go further! Such partiality would be a piece of idiocy.

A man,—not a writer, for in a writer there are many men,—an author, rather, should resemble Janus, see behind and before, become a spy, examine an idea in all its phases, delve alternately into the soul of Alceste and into that of Philaenete, know everything though he does not tell it, never be tiresome, and—

We will not conclude this programme, for we should tell the whole, and that would be frightful for those who reflect upon the present condition of literature.

Furthermore, an author who speaks for himself in the middle of his book, resembles the old fellow in "The Speaking Picture," when he puts his face in the hole cut in the painting. The author does not forget that in the Chamber, no one can take the floor between two votes. Enough, therefore!

Here follows the female portion of the book: for, to resemble marriage perfectly, it ought to be more or less hermaphroditic.

PETTY TROUBLES OF MARRIED LIFE HUSBANDS DURING THE SECOND MONTH.

Two young married women, Caroline and Stephanie, who had been early friends at M'lle Machefer's boarding school, one of the most celebrated educational institutions in the Faubourg St. Honore, met at a ball given by Madame de Fischtaminel, and the following conversation took place in a window-seat in the boudoir.

It was so hot that a man had acted upon the idea of going to breathe the fresh night air, some time before the two young women. He had placed himself in the angle of the balcony, and, as there were many flowers before the window, the two friends thought themselves alone....