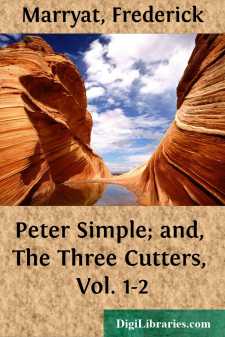 The great advantage of being the fool of the family—My destiny is decided, and I am consigned to a stockbroker as part of His Majesty's sea stock—Unfortunately for me Mr Handycock is a bear, and I get very little dinner.

If I cannot narrate a life of adventurous and daring exploits, fortunately I have no heavy crimes to confess; and, if I do not rise in the estimation of the reader for acts of gallantry and devotion in my country's cause, at least I may claim the merit of zealous and persevering continuance in my vocation. We are all of us variously gifted from Above, and he who is content to walk, instead of to run, on his allotted path through life, although he may not so rapidly attain the goal, has the advantage of not being out of breath upon his arrival. Not that I mean to infer that my life has not been one of adventure. I only mean to say that, in all which has occurred, I have been a passive, rather than an active, personage; and, if events of interest are to be recorded, they certainly have not been sought by me.

As well as I can recollect and analyze my early propensities, I think that, had I been permitted to select my own profession, I should in all probability have bound myself apprentice to a tailor; for I always envied the comfortable seat which they appeared to enjoy upon the shopboard, and their elevated position, which enabled them to look down upon the constant succession of the idle or the busy, who passed in review before them in the main street of the country town, near to which I passed the first fourteen years of my existence.

But my father, who was a clergyman of the Church of England, and the youngest brother of a noble family, had a lucrative living, and a "soul above buttons," if his son had not. It has been from time immemorial the heathenish custom to sacrifice the greatest fool of the family to the prosperity and naval superiority of the country, and, at the age of fourteen, I was selected as the victim. If the custom be judicious, I had no reason to complain. There was not one dissentient voice, when it was proposed before all the varieties of my aunts and cousins, invited to partake of our new-year's festival. I was selected by general acclamation. Flattered by such an unanimous acknowledgment of my qualification, and a stroke of my father's hand down my head which accompanied it, I felt as proud, and, alas! as unconscious as the calf with gilded horns, who plays and mumbles with the flowers of the garland which designates his fate to every one but himself. I even felt, or thought I felt, a slight degree of military ardour, and a sort of vision of future grandeur passed before me, in the distant vista of which I perceived a coach with four horses and a service of plate. It was, however, driven away before I could decipher it, by positive bodily pain, occasioned by my elder brother Tom, who, having been directed by my father to snuff the candles, took the opportunity of my abstraction to insert a piece of the still ignited cotton into my left ear....