Peter: a novel of which he is not the hero 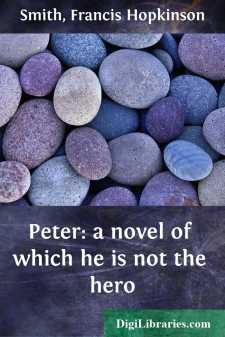 Peter was still poring over his ledger one dark afternoon in December, his bald head glistening like a huge ostrich egg under the flare of the overhead gas jets, when Patrick, the night watchman, catching sight of my face peering through the outer grating, opened the door of the Bank.

The sight so late in the day was an unusual one, for in all the years that I have called at the Bank—ten, now—no, eleven since we first knew each other—Peter had seldom failed to be ready for our walk uptown when the old moon-faced clock high up on the wall above the stove pointed at four.

"I thought there was something up!" I cried. "What is it, Peter—balance wrong?"

He did not answer, only waved his hand in reply, his bushy gray eyebrows moving slowly, like two shutters that opened and closed, as he scanned the lines of figures up and down, his long pen gripped tight between his thin, straight lips, as a dog carries a bone.

I never interrupt him when his brain is nosing about like this; it is better to keep still and let him ferret it out. So I sat down outside the curved rail with its wooden slats backed by faded green curtains, close to the big stove screened off at the end of the long room, fixed one eye on the moon-face and the other on the ostrich egg, and waited.

There are no such banks at the present time—were no others then, and this story begins not so very many years' ago—A queer, out-of-date, mouldy old barn of a bank, you would say, this Exeter—for an institution wielding its influence. Not a coat of paint for half a century; not a brushful of whitewash for goodness knows how much longer. As for the floor, it still showed the gullies and grooves, with here and there a sturdy knot sticking up like a nut on a boiler, marking the track of countless impatient depositors and countless anxious borrowers, it may be, who had lock-stepped one behind the other for fifty years or more, in their journey from the outer door to the windows where the Peters of the old days, and the Peter of the present, presided over the funds entrusted to their care.

Well enough in its day, you might have said, with a shrug, as you looked over its forlorn interior. Well enough in its day! Why, man, old John Astor, James Beekman, Rhinelander Stewart, Moses Grinnell, and a lot of just such worthies—men whose word was as good as their notes—and whose notes were often better than the Government's, presided over its destinies, and helped to stuff the old-fashioned vault with wads of gilt-edged securities—millions in value if you did but know it—and making it what it is to-day. If you don't believe the first part of my statement, you've only to fumble among the heap of dusty ledgers piled on top of the dusty shelves; and if you doubt the latter part, then try to buy some of the stock and see what you have to pay for it. Although the gas was turned off in the directors' room, I could still see from where I sat the very mahogany table under which these same ruffle-shirted, watch-fobbed, snuff-taking old fellows tucked their legs when they decided on who should and who should not share the bank's confidence....