Personality Plus Some Experiences of Emma McChesney and Her Son, Jock 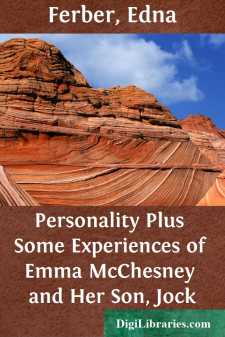 I MAKING GOOD WITH MOTHER

When men began to build cities vertically instead of horizontally there passed from our highways a picturesque figure, and from our language an expressive figure of speech. That oily-tongued, persuasive, soft-stepping stranger in the rusty Prince Albert and the black string tie who had been wont to haunt our back steps and front offices with his carefully wrapped bundle, retreated in bewildered defeat before the clanging blows of steel on steel that meant the erection of the first twenty-story skyscraper. "As slick," we used to say, "as a lightning-rod agent." Of what use his wares on a building whose tower was robed in clouds and which used the chain lightning for a necklace? The Fourth Avenue antique dealer had another curio to add to his collection of andirons, knockers, snuff boxes and warming pans.

But even as this quaint figure vanished there sprang up a new and glittering one to take his place. He stood framed in the great plate-glass window of the very building which had brought about the defeat of his predecessor. A miracle of close shaving his face was, and a marvel of immaculateness his linen. Dapper he was, and dressy, albeit inclined to glittering effects and a certain plethory at the back of the neck. Back of him stood shining shapes that reflected his glory in enamel, and brass, and glass. His language was floral, but choice; his talk was of gearings and bearings and cylinders and magnetos; his method differed from that of him who went before as the method of a skilled aëronaut differs from that of the man who goes over Niagara in a barrel. And as he multiplied and spread over the land we coined a new figure of speech. "Smooth!" we chuckled. "As smooth as an automobile salesman."

But even as we listened, fascinated by his fluent verbiage there grew within us a certain resentment. Familiarity with his glittering wares bred a contempt of them, so that he fell to speaking of them as necessities instead of luxuries. He juggled figures, and thought nothing of four of them in a row. We looked at our five-thousand-dollar salary, so strangely shrunken and thin now, and even as we looked we saw that the method of the unctuous, anxious stranger had become antiquated in its turn.

Then from his ashes emerged a new being. Neither urger nor spellbinder he. The twentieth century was stamped across his brow, and on his lips was ever the word "Service." Silent, courteous, watchful, alert, he listened, while you talked. His method, in turn, made that of the silk-lined salesman sound like the hoarse hoots of the ballyhoo man at a county fair. Blithely he accepted five hundred thousand dollars and gave in return—a promise. And when we would search our soul for a synonym to express all that was low-voiced, and suave, and judicious, and patient, and sure, we began to say, "As alert as an advertising expert."

Jock McChesney, looking as fresh and clear-eyed as only twenty-one and a cold shower can make one look, stood in the doorway of his mother's bedroom....