by R. A. (Rolfe Arnold) Scott-James 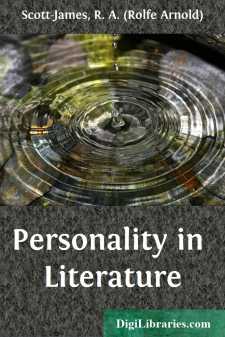 THE DEGRADATION OF BEAUTY

Some time ago I found myself at an exhibition of Post-Impressionist pictures, under the ægis of an artist who was himself of that persuasion. Indeed, he was one of the exhibitors, and I was constrained to express my opinions in the form of questions. We passed before a picture which to my untutored eyes was formless, meaningless and ugly. It was by a well-known artist, and my instructor admired it. He said it was the head of a woman, and he indicated certain hook-like marks in the painting which to him distinctly suggested the nose, the mouth and the neck of a woman, reduced to their simplest terms. After he had fully explained the picture, I asked him if the result was in any sense beautiful to him.

"Beautiful!" he exclaimed, with something of disdain in his voice. "Why should it be beautiful? I do not require that a picture should be beautiful."

He had not finished, but I was relieved by the first part of his reply. As I cannot hope to appreciate more than a certain number of things in the world, I am willing, so far as pictures are concerned, to be limited to beautiful pictures, and to be proved ignorant and obtuse in regard to all others. For the same reason I have long since reconciled myself to the fact that there are some branches of science and natural history which I shall never master. I shall always endeavour to follow clever writers like Shaw and Brieux whose plays have, as the former puts it, "a really scientific natural history" for their basis. But I cannot hope to acquire the whole of knowledge or reform the whole of the world, and there are books which contain a great deal of sound knowledge and urgent opinion for which I have no use. Moreover, I deny Mr. Shaw's right to interfere with my enjoyment if I turn to literature which teaches nothing and serves no utilitarian or reforming purpose. It is only when I am in the scientific frame of mind that I desire accurate natural history, or when I am in the reforming frame of mind that I desire earnest exhortations to improve society. In the same way I am only drawn to the Post-Impressionists when I want, not beautiful pictures, but an agreeable sense of the impudence and imbecility of professional craftsmen. But when I am in the mood for literature and art, I demand something that shall appeal to my sense of beauty; and I refuse to be shamed into believing that I ought to prefer scientific knowledge, or ethical suasion, or those particular kinds of ugliness admired by some Realists and some Post-Impressionists.

But I was a little disconcerted when my Post-Impressionist artist concluded with the remark: "I have never yet found anyone who could tell me what he meant by beauty."

Certainly I had not asked him for an exact definition, or any definition of Beauty in the abstract. I should have been satisfied if, for the moment, he had taken it on trust, as most of us take the law of gravity, the postulates of Euclid, and the evidence of our senses. I was not dismayed because a single Post-Impressionist thought that "beautiful" is a word that has no meaning; but because the reply came so pat upon his lips;—he was repeating, parrot-like, a current view; he was adopting the fashionable attitude of scorn towards what is regarded as an ancient tyranny, long since indicted and exploded....