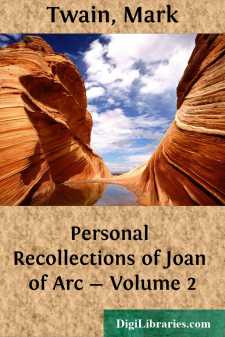 THE TROOPS must have a rest. Two days would be allowed for this. The morning of the 14th I was writing from Joan's dictation in a small room which she sometimes used as a private office when she wanted to get away from officials and their interruptions. Catherine Boucher came in and sat down and said:

"Indeed, I am not sorry for that, but glad. What is in your mind?"

"This. I scarcely slept last night, for thinking of the dangers you are running. The Paladin told me how you made the duke stand out of the way when the cannon-balls were flying all about, and so saved his life."

"Right? Yes; but you stayed there yourself. Why will you do like that? It seems such a wanton risk."

"How can you say that, Joan, with those deadly things flying all about you?"

Joan laughed, and tried to turn the subject, but Catherine persisted. She said:

"It was horribly dangerous, and it could not be necessary to stay in such a place. And you led an assault again. Joan, it is tempting Providence. I want you to make me a promise. I want you to promise me that you will let others lead the assaults, if there must be assaults, and that you will take better care of yourself in those dreadful battles. Will you?"

But Joan fought away from the promise and did not give it. Catherine sat troubled and discontented awhile, then she said:

"Joan, are you going to be a soldier always? These wars are so long—so long. They last forever and ever and ever."

There was a glad flash in Joan's eye as she cried:

"This campaign will do all the really hard work that is in front of it in the next four days. The rest of it will be gentler—oh, far less bloody. Yes, in four days France will gather another trophy like the redemption of Orleans and make her second long step toward freedom!"

Catherine started (and so did I); then she gazed long at Joan like one in a trance, murmuring "four days—four days," as if to herself and unconsciously. Finally she asked, in a low voice that had something of awe in it:

"Joan, tell me—how is it that you know that? For you do know it, I think."

"Yes," said Joan, dreamily, "I know—I know. I shall strike—and strike again. And before the fourth day is finished I shall strike yet again." She became silent. We sat wondering and still. This was for a whole minute, she looking at the floor and her lips moving but uttering nothing. Then came these words, but hardly audible: "And in a thousand years the English power in France will not rise up from that blow."

It made my flesh creep. It was uncanny. She was in a trance again—I could see it—just as she was that day in the pastures of Domremy when she prophesied about us boys in the war and afterward did not know that she had done it. She was not conscious now; but Catherine did not know that, and so she said, in a happy voice:

"Oh, I believe it, I believe it, and I am so glad! Then you will come back and bide with us all your life long, and we will love you so, and honor you!"

A scarcely perceptible spasm flitted across Joan's face, and the dreamy voice muttered:

"Before two years are sped I shall die a cruel death!"

I sprang forward with a warning hand up....