Perfect Behavior; a guide for ladies and gentlemen in all social crises 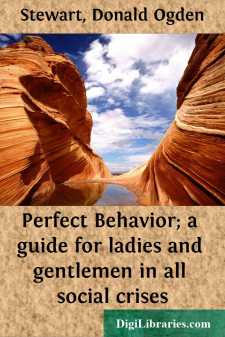 CHAPTER ONE: THE ETIQUETTE OF COURTSHIP A FEW WORDS ABOUT LOVE

Courtship is one of the oldest of social customs, even antedating in some countries such long-established usages as marriage, or the wearing of white neckties with full evening dress. The beginnings of the etiquette of courtship were apparently connected in some way with the custom of "love" between the sexes, and many of the old amatory forms still survive in the modern courtship. It is generally agreed among students of the history of etiquette that when "love" first began to become popular among the better class of younger people they took to it with such avidity that it was necessary to devise some sort of rules for the conduct of formal or informal love-making. These rules, together with various amendments, now constitute the etiquette of courtship.

Suppose, for example, that you are a young gentleman named Richard Roe desirous of entering upon a formal courtship with some refined young girl of fashion. You are also, being a college graduate, engaged in the bond business. One morning there comes into your financial institution a young lady, named Dorothy Doe, who at once attracts your attention by her genteel manners, as exemplified by the fact that she calls the president of your company "father." So many young people seem to think it "smart" to refer to their parents as "dad" or "my old man"; you are certain, as soon as you hear her say "Hello, father" to your employer, that she is undoubtedly a worthy object of courtship.

CORRECT INTRODUCTIONS; HOW TO MAKE THEM

Your first step should be, of course, the securing of an introduction. Introductions still play an important part in social intercourse, and many errors are often perpetrated by those ignorant of savoir faire (correct form). When introducing a young lady to a stranger for example, it is not au fait (correct form) to simply say, "Mr. Roe, I want you to shake hands with my friend Dorothy." Under the rules of the beau monde (correct form) this would probably be done as follows: "Dorothy (or Miss Doe), shake hands with Mr. Roe." Always give the name of the lady first, unless you are introducing some one to the President of the United States, the Archbishop of Canterbury, a member of the nobility above a baron, or a customer. The person who is being "introduced" then extends his (or her) right ungloved hand and says, "Shake." You "shake," saying at the same time, "It's warm (cool) for November (May)," to which the other replies, "I'll say it is."

This brings up the interesting question of introducing two people to each other, neither of whose names you can remember. This is generally done by saying very quickly to one of the parties, "Of course you know Miss Unkunkunk." Say the last "unk" very quickly, so that it sounds like any name from Ab to Zinc. You might even sneeze violently. Of course, in nine cases out of ten, one of the two people will at once say, "I didn't get the name," at which you laugh, "Ha! Ha! Ha!" in a carefree manner several times, saying at the same time, "Well, well—so you didn't get the name—you didn't get the name—well, well." If the man still persists in wishing to know who it is to whom he is being introduced, the best procedure consists in simply braining him on the spot with a club or convenient slab of paving stone....