Percy Bysshe Shelley as a Philosopher and Reformer 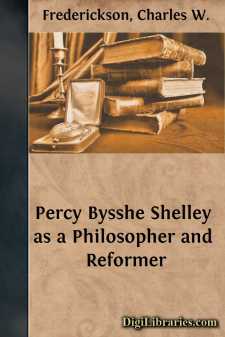 PERCY BYSSHE SHELLEY, AS A PHILOSOPHER AND REFORMER. A PAPER READ BEFORE THE NEW YORK LIBERAL CLUB, ON FRIDAY, AUGUST 6TH, 1875. "Let us see the Truth, whatever that may be."—SHELLEY, 1822.

Mr. Vice-President and Members of the Liberal Club:

"The Blood of the Martyr is the Seed of the Church." Persecution ever fails in accomplishing its desired ends, and as a rule lays the foundations broad and deep for the triumph of the objects of and principles inculcated by the persecuted.

Driven from their homes by fanatical tyranny, not permitted to worship as they thought fit, a band of noble and earnest, yet on some points mistaken men, were, a little over two hundred and fifty years ago, landed on this continent from the good ship "Mayflower." The "Pilgrim Fathers" were, in their native land, refused liberty of conscience and freedom of discussion; their apparent loss was our gain, for if it had not been for that despotism, and the corresponding re-action, which made those stern old zealots give to others many of the inalienable rights of liberty denied to themselves, you and I could not to-night perhaps be allowed to meet face to face, without fear, to discuss metaphysical and social questions in their broadest aspects, without the civil or theological powers intervening to close our mouths.

"Fragile in health and frame; of the purest habits in morals; full of devoted generosity and universal kindness; glowing with ardor to attain wisdom; resolved at every personal sacrifice to do right; burning with a desire for affection and sympathy," a boy-under-graduate of Oxford, described as of tall, delicate, and fragile figure, with large and lively eyes, with expressive, beautiful and feminine features, with head covered with long, brown hair, of gracefulness and simplicity of manner, the heir to a title and the representation of one of the most ancient English families, which numbered Sir Philip Sidney on its roll of illustrious names, just sixty-four years ago, and in this nineteenth century, for no licentiousness, violence, or dishonor, but, for his refusal to criminate himself or inculpate friends, was, without trial, expelled by learned divines from his university for writing an argumentative thesis, which, if it had been the work of some Greek philosopher, would have been hailed by his judges as a fine specimen of profound analytical abstruseness—for that expulsion are we the debtors to theological charity and tolerance for "Queen Mab."

Excommunicated by a mercenary and abject priesthood, cast off by a savage father, the admirer of that gloomy theology founded by the murderer of Michael Servetus, and charged by his jealous brother writers as one of the founders of a Satanic School, for neither immorality of life nor breach of the parental relation, but for heterodoxy to an expiring system of dogmatism, and for acting on and asserting the right of man to think and judge for himself, a father was to have two children torn from him, in the sacred name of law and justice, by the principal adviser of a dying madman, "Defender of the Faith, by Law Established," and by us despised as the self-willed tyrant, who lost America and poured out human blood like water to gratify his lust of power....