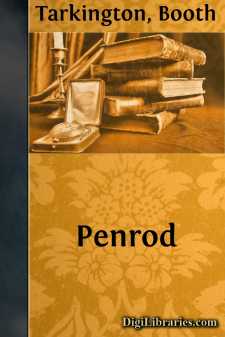 CHAPTER I A BOY AND HIS DOG

Penrod sat morosely upon the back fence and gazed with envy at Duke, his wistful dog.

A bitter soul dominated the various curved and angular surfaces known by a careless world as the face of Penrod Schofield. Except in solitude, that face was almost always cryptic and emotionless; for Penrod had come into his twelfth year wearing an expression carefully trained to be inscrutable. Since the world was sure to misunderstand everything, mere defensive instinct prompted him to give it as little as possible to lay hold upon. Nothing is more impenetrable than the face of a boy who has learned this, and Penrod's was habitually as fathomless as the depth of his hatred this morning for the literary activities of Mrs. Lora Rewbush—an almost universally respected fellow citizen, a lady of charitable and poetic inclinations, and one of his own mother's most intimate friends.

Mrs. Lora Rewbush had written something which she called "The Children's Pageant of the Table Round," and it was to be performed in public that very afternoon at the Women's Arts and Guild Hall for the benefit of the Coloured Infants' Betterment Society. And if any flavour of sweetness remained in the nature of Penrod Schofield after the dismal trials of the school-week just past, that problematic, infinitesimal remnant was made pungent acid by the imminence of his destiny to form a prominent feature of the spectacle, and to declaim the loathsome sentiments of a character named upon the programme the Child Sir Lancelot.

After each rehearsal he had plotted escape, and only ten days earlier there had been a glimmer of light: Mrs. Lora Rewbush caught a very bad cold, and it was hoped it might develop into pneumonia; but she recovered so quickly that not even a rehearsal of the Children's Pageant was postponed. Darkness closed in. Penrod had rather vaguely debated plans for a self-mutilation such as would make his appearance as the Child Sir Lancelot inexpedient on public grounds; it was a heroic and attractive thought, but the results of some extremely sketchy preliminary experiments caused him to abandon it.

There was no escape; and at last his hour was hard upon him. Therefore he brooded on the fence and gazed with envy at his wistful Duke.

The dog's name was undescriptive of his person, which was obviously the result of a singular series of mesalliances. He wore a grizzled moustache and indefinite whiskers; he was small and shabby, and looked like an old postman. Penrod envied Duke because he was sure Duke would never be compelled to be a Child Sir Lancelot. He thought a dog free and unshackled to go or come as the wind listeth. Penrod forgot the life he led Duke.

There was a long soliloquy upon the fence, a plaintive monologue without words: the boy's thoughts were adjectives, but they were expressed by a running film of pictures in his mind's eye, morbidly prophetic of the hideosities before him. Finally he spoke aloud, with such spleen that Duke rose from his haunches and lifted one ear in keen anxiety.