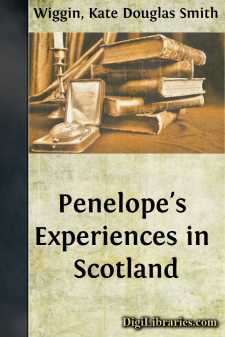 We have travelled together before, Salemina, Francesca, and I, and we know the very worst there is to know about one another. After this point has been reached, it is as if a triangular marriage had taken place, and, with the honeymoon comfortably over, we slip along in thoroughly friendly fashion. I use no warmer word than'friendly' because, in the first place, the highest tides of feeling do not visit the coasts of triangular alliances; and because, in the second place, 'friendly' is a word capable of putting to the blush many a more passionate and endearing one.

Every one knows of our experiences in England, for we wrote volumes of letters concerning them, the which were widely circulated among our friends at the time, and read aloud under the evening lamps in the several cities of our residence.

Since then few striking changes have taken place in our history.

Salemina returned to Boston for the winter, to find, to her amazement, that for forty odd years she had been rather overestimating it.

On arriving in New York, Francesca discovered that the young lawyer whom for six months she had been advising to marry somebody more worthy than herself was at last about to do it. This was somewhat in the nature of a shock, for Francesca had been in the habit, ever since she was seventeen, of giving her lovers similar advice, and up to this time no one of them has ever taken it. She therefore has had the not unnatural hope, I think, of organising at one time or another all these disappointed and faithful swains into a celibate brotherhood; and perhaps of driving by the interesting monastery with her husband and calling his attention modestly to the fact that these poor monks were filling their barren lives with deeds of piety, trying to remember their Creator with such assiduity that they might, in time, forget Her.

Her chagrin was all the keener at losing this last aspirant to her hand in that she had almost persuaded herself that she was as fond of him as she was likely to be of anybody, and that on the whole she had better marry him and save his life and reason.

Fortunately she had not communicated this gleam of hope by letter, feeling, I suppose, that she would like to see for herself the light of joy breaking over his pale cheek. The scene would have been rather pretty and touching, but meantime the Worm had turned and despatched a letter to the Majestic at the quarantine station, telling her that he had found a less reluctant bride in the person of her intimate friend Miss Rosa Van Brunt; and so Francesca's dream of duty and sacrifice was over.

Salemina says she was somewhat constrained for a week and a trifle cynical for a fortnight, but that afterwards her spirits mounted on ever ascending spirals to impossible heights, where they have since remained. It appears from all this that although she was piqued at being taken at her word, her heart was not in the least damaged....