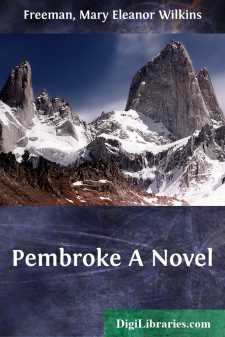 At half-past six o'clock on Sunday night Barnabas came out of his bedroom. The Thayer house was only one story high, and there were no chambers. A number of little bedrooms were clustered around the three square rooms—the north and south parlors, and the great kitchen.

Barnabas walked out of his bedroom straight into the kitchen where the other members of the family were. They sat before the hearth fire in a semi-circle—Caleb Thayer, his wife Deborah, his son Ephraim, and his daughter Rebecca. It was May, but it was quite cold; there had been talk of danger to the apple blossoms; there was a crisp coolness in the back of the great room in spite of the hearth fire.

Caleb Thayer held a great leather-bound Bible on his knees, and was reading aloud in a solemn voice. His wife sat straight in her chair, her large face tilted with a judicial and argumentative air, and Rebecca's red cheeks bloomed out more brilliantly in the heat of the fire. She sat next her mother, and her smooth dark head with its carven comb arose from her Sunday kerchief with a like carriage. She and her mother did not look alike, but their motions were curiously similar, and perhaps gave evidence to a subtler resemblance in character and motive power.

Ephraim, undersized for his age, in his hitching, home-made clothes, twisted himself about when Barnabas entered, and stared at him with slow regard. He eyed the smooth, scented hair, the black satin vest with a pattern of blue flowers on it, the blue coat with brass buttons, and the shining boots, then he whistled softly under his breath.

“Ephraim!” said his mother, sharply. She had a heavy voice and a slight lisp, which seemed to make it more impressive and more distinctively her own. Caleb read on ponderously.

“Where ye goin', Barney?” Ephraim inquired, with a chuckle and a grin, over the back of his chair.

“Ephraim!” repeated his mother. Her blue eyes frowned around his sister at him under their heavy sandy brows.

Ephraim twisted himself back into position. “Jest wanted to know where he was goin',” he muttered.

Barnabas stood by the window brushing his fine bell hat with a white duck's wing. He was a handsome youth; his profile showed clear and fine in the light, between the sharp points of his dicky bound about by his high stock. His cheeks were as red as his sister's.

When he put on his hat and opened the door, his mother herself interrupted Caleb's reading.

“Don't you stay later than nine o'clock, Barnabas,” said she.

The young man murmured something unintelligibly, but his tone was resentful.

“I ain't going to have you out as long as you were last Sabbath night,” said his mother, in quick return. She jerked her chin down heavily as if it were made of iron.

Barnabas went out quickly, and shut the door with a thud.

“If he was a few years younger, I'd make him come back an' shut that door over again,” said his mother.

Caleb read on; he was reading now one of the imprecatory psalms. Deborah's blue eyes gleamed with warlike energy as she listened: she confused King David's enemies with those people who crossed her own will....