Peck's Bad Boy with the Cowboys 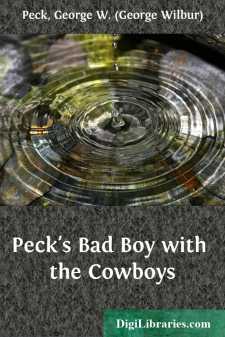 The Bad Boy and His Pa Go West—Pa Plans to Be a Dead Ringer forBuffalo Bill—They Visit an Indian Reservation and Pa Has anEncounter with a Grizzly Bear.

Well, I never saw such a change in a man as there has been in pa, since the circus managers gave him a commission to go out west and hire an entire outfit for a wild west show, regardless of cost, to be a part of our show next year. He acts like he was a duke, searching for a rich wife. No country politician that never had been out of his own county, appointed minister to England, could put on more style than Pa does.

The first day after the show left us at St. Louis we felt pretty bum, 'cause we missed the smell of the canvas, and the sawdust, and the animals, and the indescribable odor that goes with a circus. We missed the performers, the band, the surging crowds around the ticket wagon, and the cheers from the seats. It almost seemed as though there had been a funeral in the family, and we were sitting around in the cold parlor waiting for the lawyers to read the will. But in a couple of days Pa got busy, and he hired a young Indian who was a graduate of Carlisle, as an interpreter, and a reformed cowboy, to go with us to the cattle ranges, and an old big game hunter who was to accompany us to the places where we could find buffalo and grizzly bears. Pa chartered a car to take us west, and after the Indian and the cowboy and the hunter got sobered up, on the train, and got the St. Louis ptomaine poison out of their systems, and we were going through Kansas, Pa got us all into the smoking compartment.

"Gentlemen," he said, "I want you to know that this expedition is backed by the wealth of the circus world, and that there is nothing cheap about it. We are to hire, regardless of expense, the best riders, the best cattle ropers, and the best everything that goes with a wild west show. We all know that Buffalo Bill must soon, in the nature of things, pass away as a feature for shows, and I have been selected to take the place of Bill in the circus world, when he cashes in. You may have noticed that I have been letting my hair and mustache and chin whiskers grow the last few months, so that next year I will be a dead ringer for Bill. All I want is some experience as a hero of the plains, as a scout, a hunter, a scalper of Indians, a rider of wild horses, and a few things like that, and next year you will see me ride a white horse up in front of the press seats in our show, take off my broad- brimmed hat, and wave it at the crowned heads in the boxes, give the spurs to my horse, and ride away like a cavalier, and the show will go on, to the music of hand-clapping from the assembled thousands, see?"

The cowboy looked at pa's stomach, and said: "Well, Mr. Man, if you are going to blow yourself for a second Buffalo Bill, I am with you, at the salary agreed upon, till the cows come home, but you have got to show me that you have got no yellow streak, when it comes to cutting out steers that are wild and carry long horns, and you've got to rope 'em, and tie 'em all alone, and hold up your hands for judgment, in ten seconds."

Pa said he could learn to do it in a week, but the cowman said: "Not on your life." The hunter said he would be ready to call pa B....