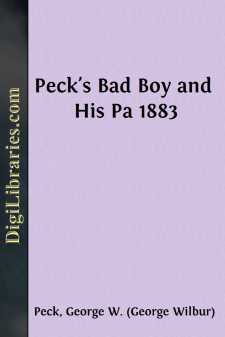 A young fellow who is pretty smart on general principles, and who is always in good humor, went into a store the other morning limping and seemed to be broke up generally. The proprietor asked him if he wouldn't sit down, and he said he couldn't very well, as his back was lame. He seemed discouraged, and the proprietor asked him what was the matter. "Well," says he, as he put his hand on his pistol pocket and groaned, "There is no encouragement for a boy to have any fun nowadays. If a boy tries to play an innocent joke he gets kicked all over the house." The store keeper asked him what had happened to disturb his hilarity. He said he had played a joke on his father and had been limping ever since.

"You see, I thought the old man was a little spry. You know he is no spring chicken yourself; and though his eyes are not what they used to be, yet he can see a pretty girl further than I can. The other day I wrote a note in a fine hand and addressed it to him, asking him to meet me on the corner of Wisconsin and Milwaukee streets, at 7:30 on Saturday evening, and signed the name of 'Daisy' to it. At supper time Pa he was all shaved up and had his hair plastered over the bald spot, and he got on some clean cuffs, and said he was going to the Consistory to initiate some candidates from the country, and he might not be in till late. He didn't eat much supper, and hurried off with my umbrella. I winked at Ma but didn't say anything. At 7:30 I went down town and he was standing there by the post-office corner, in a dark place. I went by him and said, "Hello, Pa, what are you doing there?" He said he was waiting for a man. I went down street and pretty soon I went up on the other corner by Chapman's and he was standing there. You see, he didn't know what corner "Daisy" was going to be on, and had to cover all four corners. I saluted him and asked him if he hadn't found his man yet, and he said no, the man was a little late. It is a mean boy that won't speak to his Pa when he sees him standing on a corner, I went up street and I saw Pa cross over by the drug store in a sort of a hurry, and I could see a girl going by with a water-proof on, but she skited right along and Pa looked kind of solemn, the way he does when I ask him for new clothes. I turned and came back and he was standing there in the doorway, and I said, "Pa you will catch cold if you stand around waiting for a man. You go down to the Consistory and let me lay for the man." Pa said, "never you mind, you go about your business and I will attend to the man."

"Well, when a boy's Pa tells him to never you mind, and looks spunky, my experience is that a boy wants to go right away from there, and I went down street. I thought I would cross over and go up the other side, and see how long he would stay....