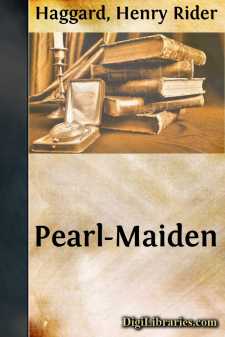 CHAPTER I THE PRISON AT CÆSAREA

It was but two hours after midnight, yet many were wakeful in Cæsarea on the Syrian coast. Herod Agrippa, King of all Palestine—by grace of the Romans—now at the very apex of his power, celebrated a festival in honour of the Emperor Claudius, to which had flocked all the mightiest in the land and tens of thousands of the people. The city was full of them, their camps were set upon the sea-beach and for miles around; there was no room at the inns or in the private houses, where guests slept upon the roofs, the couches, the floors, and in the gardens. The great town hummed like a hive of bees disturbed after sunset, and though the louder sounds of revelling had died away, parties of feasters, many of them still crowned with fading roses, passed along the streets shouting and singing to their lodgings. As they went, they discussed—those of them who were sufficiently sober—the incidents of that day's games in the great circus, and offered or accepted odds upon the more exciting events of the morrow.

The captives in the prison that was set upon a little hill, a frowning building of brown stone, divided into courts and surrounded by a high wall and a ditch, could hear the workmen at their labours in the amphitheatre below. These sounds interested them, since many of those who listened were doomed to take a leading part in the spectacle of this new day. In the outer court, for instance, were a hundred men called malefactors, for the most part Jews convicted of various political offences. These were to fight against twice their number of savage Arabs of the desert taken in a frontier raid, people whom to-day we should know as Bedouins, mounted and armed with swords and lances, but wearing no mail. The malefactor Jews, by way of compensation, were to be protected with heavy armour and ample shields. Their combat was to last for twenty minutes by the sand-glass, when, unless they had shown cowardice, those who were left alive of either party were to receive their freedom. Indeed, by a kindly decree the King Agrippa, a man who did not seek unnecessary bloodshed, contrary to custom, even the wounded were to be spared, that is, if any would undertake the care of them. Under these circumstances, since life is sweet, all had determined to fight their best.

In another division of the great hall was collected a very different company. There were not more than fifty or sixty of these, so the wide arches of the surrounding cloisters gave them sufficient shelter and even privacy. With the exception of eight or ten men, all of them old, or well on in middle age, since the younger and more vigorous males had been carefully drafted to serve as gladiators, this little band was made of women and a few children. They belonged to the new sect called Christians, the followers of one Jesus, who, according to report, was crucified as a troublesome person by the governor, Pontius Pilate, a Roman official, who in due course had been banished to Gaul, where he was said to have committed suicide....