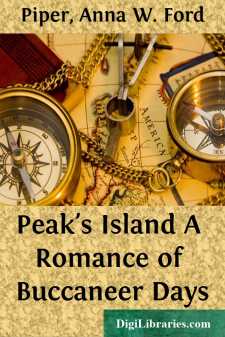 CHAPTER I. Roll on thou deep and dark blue ocean roll;. . . . . . Upon the watery plain.The wrecks are all thy deed, nor doth remainA shadow of man's ravage, save his own,When for a moment like a drop of rain,He sinks into thy depths with bubbling groan,Without a grave, unknelled, uncoffined, and unknown.

Dead bodies everywhere. The ocean, lashed to fury by the gale of yesterday, came booming and hissing upon the beach in great breakers white with foam; each billow as it dashed upon the jagged and broken rocks bore in its terrible embrace still more human victims, or some portion of the two unlucky ships that were fast breaking up. One wedged in between two rocks with just sufficient play to allow of its heaving from side to side, with every wave that struck it. The other and much larger vessel, the Queen Elizabeth, a fine British ship, which had sailed from England freighted with a cargo of general merchandise for the colony of Virginia, went crashing up against the cruel stone teeth of the cliff which overhung and projected into the angry sea; dismasted, her bulwarks and rigging torn away she floated out into deeper water only to be driven back again upon the rocks, by the violence of the wind and the rapidly incoming tide.

Another crash and another, the forecastle carried away, the decks opening, bales, chests, cordage, stores of all sorts tossed high up on the shore, more dead bodies—chiefly of men, for they had some time before given up to the few women and children the now capsized and shattered boats. All along the shore, as far as eye could see, the beach was composed of a heterogeneous mass of enormous fragments of rock thrown together and piled up on each other, leaving here and there in their midst a separate pool of sea water; in some of these pools was a dead body or two, but by far the greater number were lying in every imaginable, distorted position among the huge, irregular blocks of stone. Many, who had been washed in sufficiently far to escape drowning, were killed by the force with which they were dashed on shore: there, with broken bones and gnashed and blood-stained bodies, they slept in death, like men who had fallen in some great battle. It was noon, but not a ray of sunlight glinted across the ghastly scene. Every sound was lost in the terrific roar of the great, heaving hills of water, which rolled in continuously; huge masses of wet gray cloud hung over all, obscuring or transforming every visible object. Far up among the shingle lay one human form which still bore signs of life. It was that of a young lady, attired in deep mourning, a stream of blood trickled down the pale face, and from time to time one hand moved convulsively toward a deep cut in her head as if to assuage the pain; presently in half-consciousness she whispered "Do not tell my mother I am hurt, it would grieve her. She has had too much sorrow already."

The beloved mother, and all others who had made life precious to the speaker, had three years previously been tenderly laid to rest in their quiet graves thousands of miles away; but at this moment the mind had only half awakened....