Peak and Prairie From a Colorado Sketch-book 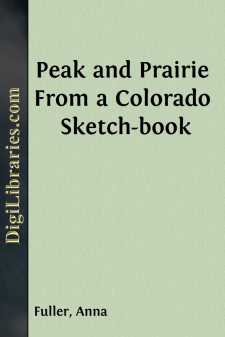 A PILGRIM IN THE FAR WEST.

The Peak was superb that morning, big and strong, and glittering with snow. Little Mrs. Nancy Tarbell turned, after shutting and locking the door of her cottage, and looked down the street, at the end of which the friendly giant stood out against a clear blue sky. The cottonwood trees on either side of the road were just coming into leaf, and their extended branches framed in her mighty neighbor in a most becoming manner. The water in the irrigating ditch beneath the trees was running merrily. The sound of it brought a wistful look into the cheerful old face. It made Mrs. Nancy think of the gay little brook in the pasture behind the house at home—at home, in far New England.

Surely it must have been a strange wind of destiny that wafted this unadventurous little woman across half a continent to the very foot of the Rocky Mountains—a long and weary journey for the young and vigorous. Yet it was something no stranger than a mother's love for her only child. For "Willie's" sake the widow Tarbell had turned her back upon the dear New England woods and meadows, upon the tidy village where every man and woman was her friend; for his sake she had come to dwell among strangers in a strange and barren land. The old homestead had been sold, and with the meagre proceeds she had paid their way across the prairies, and had bought a little house and a lot of land on the outskirts of Springtown, while Willie looked about him for something to do. But the enemy before whom they had fled followed them to the high pure altitude it loves not, and before poor Willie had found anything to do, he had been "called up higher." This was the phrase the minister used at Willie's funeral, and it had been peculiarly comforting to the bereaved mother. She had known well that her boy needed higher air, for that she had come to live six thousand feet above the level of the New England pastures. But the Lord saw that she, with her poor human wisdom, could not lead him to the needed height, and He had called him up higher yet, where are blessing and healing forever. With this abiding consolation in her heart, Willie's mother could face the shining Peak day after day and month after month with a countenance as brave and cheerful as his own. It was only when she listened to the sound of running waters, or some other voice of the past, that the wistful look came into her face.

Meanwhile it was good life-giving air that she breathed, and good warm sunshine that rested upon her, as she stepped briskly on her way. Her little cottage was no longer on the outskirts of the town. Stately mansions had risen up about her, and a long procession of houses now stretched far up to the northward. The people idly looking forth from the windows of the stately mansions, did not realize how much a part of the landscape the little black figure had become, passing and repassing their doors. A small meek figure it was, with little indication of the bright spirit within. It was her "best dress" of ten years ago that she now "wore common." The folds of the skirt, cut in the fashion of a by-gone day, offered ample accommodation for bustle and steels, and in the absence of these props the gown had a collapsed, inconsequent air....