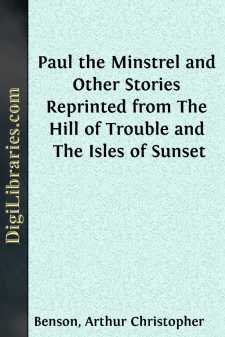 These stories were all written at a very happy time of my life, and they were first published when I was a master at Eton with a boarding-house. A house-master is not always a happy man. It is an anxious business at best. Boys are very unaccountable creatures, and the years between boyhood and adolescence are apt to represent an irresponsible mood. From the quiet childhood at home the boys have passed to what is now, most happily, in the majority of cases, a carefully guarded and sheltered atmosphere—the private school. My own private school was of the old-fashioned type, with a very independent tone of tradition; but nowadays private schools are smaller and much more domesticated. The boys live like little brothers in the company of active and kindly young masters; and then they are plunged into the rougher currents of public schools, with their strange and in many ways barbarous code of ethics, their strong and penetrating traditions. Here the boys, who have hitherto had little temptation to be anything but obedient, have to learn to govern themselves, and to do so among conventions which hardly represent the conventions of the world, and where the public opinion is curiously unaffected either by parental desires, or by the wishes, expressed or unexpressed, of the masters. A house-master is often in the position of seeing a new set of boys come into power in his house whom he may distrust; but the sense of honour among the boys is so strong that he is often the last person to hear of practices and principles prevailing in his house of which he may wholly disapprove. He may even find that many of the individual boys in his house disapprove of them too, and yet be unable to alter a tone impressed on the place by a few boys of forcible, if even sometimes unsatisfactory, character. But at the time at which these stories were written the tone of my own house was sound, sensible, and friendly; and I had the happiness of living in an atmosphere which I knew to be wholesome, manly, and pure. I used to tell or read stories on Sunday evenings to any boys who cared to come to listen; and I remember with delight those hours when perhaps twenty boys would come and sit all about my study, filling every chair and sofa and overflowing on to the floor, to listen to long, vague stories of adventure, with at all events an appearance of interest and excitement.

One wanted to do the best for the boys, to put fine ideas, if one could, into their heads and hearts. But direct moral exhortation to growing boys, feeling the life of the world quickening in their veins, and with vague old instincts of love and war rising uninterpreted in their thoughts, is apt to be a fruitless thing enough. It is not that they do not listen; but they simply do not understand the need of caution and control, nor do they see the unguarded posterns by which evil things slip smiling into the fortress of the soul.

Every now and then I used to try to shape a tale which in a figure might leave an arresting or a restraining thought in their minds; or even touch with a light of romance some of the knightly virtues which are apt to be dulled into the aspect of commonplace and uninteresting duties....