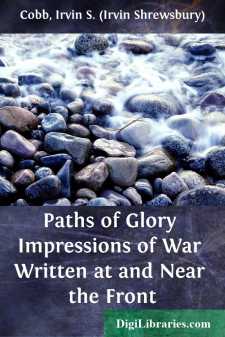 We passed through it late in the afternoon—this little Belgian town called Montignies St. Christophe—just twenty-four hours behind a dust- colored German column. I am going to try now to tell how it looked to us.

I am inclined to think I passed this way a year before, or a little less, though I cannot be quite certain as to that. Traveling 'cross country, the country is likely to look different from the way it looked when you viewed it from the window of a railroad carriage.

Of this much, though, I am sure: If I did not pass, through this little town of Montignies St. Christophe then, at least I passed through fifty like it—each a single line of gray houses strung, like beads on a cord, along a white, straight road, with fields behind and elms in front; each with its small, ugly church, its wine shop, its drinking trough, its priest in black, and its one lone gendarme in his preposterous housings of saber and belt and shoulder straps.

I rather imagine I tried to think up something funny to say about the shabby grandeur of the gendarme or the acid flavor of the cooking vinegar sold at the drinking place under the name of wine; for that time I was supposed to be writing humorous articles on European travel.

But now something had happened to Montignies St. Christophe to lift it out of the dun, dull sameness that made it as one with so many other unimportant villages in this upper left-hand corner of the map of Europe. The war had come this way; and, coming so, had dealt it a side-slap.

We came to it just before dusk. All day we had been hurrying along, trying to catch up with the German rear guard; but the Germans moved faster than we did, even though they fought as they went. They had gone round the southern part of Belgium like coopers round a cask, hooping it in with tight bands of steel. Belgium—or this part of it—was all barreled up now: chines, staves and bung; and the Germans were already across the line, beating down the sod of France with their pelting feet.

Besides we had stopped often, for there was so much to see and to hear. There was the hour we spent at Merbes-le-Chateau, where the English had been; and the hour we spent at La Buissière, on the river Sambre, where a fight had been fought two days earlier; but Merbes-le-Chateau is another story and so is La Buissière. Just after La Buissière we came to a tiny village named Neuville and halted while the local Jack-of-all- trades mended for us an invalided tire on a bicycle.

As we grouped in the narrow street before his shop, with a hiving swarm of curious villagers buzzing about us, an improvised ambulance, with a red cross painted on its side over the letters of a baker's sign, went up the steep hill at the head of the cobbled street. At that the women in the doorways of the small cottages twisted their gnarled red hands in their aprons, and whispered fearsomely among themselves, so that the sibilant sound of their voices ran up and down the line of houses in a long, quavering hiss....