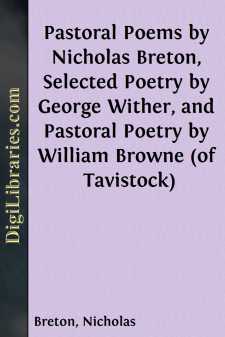 There are few issues attended with greater uncertainty than the fate of a poet, and of the three represented herein it may be said that they survive but tardily in public interest. Such a state of things, in spite of all pleading, is quite beyond reason; hence the purport of this small Anthology is at once obvious.

A group of poets graced with rarest charm and linked together by several and varied circumstances, each one figures here in unique evidence and bold relief of individuality. They are called of the order Spenserian; servants at the altar to the Pastoral Muse; and, in the reckoning of time, belong to that glorious age of great Elizabeth. Nicholas Breton (or Britton, as it is pronounced) and William Browne were both contributors to England's Helicon, of 1614, and Browne and Wither each submitted verses for The Shepherd's Pipe, a publication of the same year. The former two were, in turn, under the patronage of that most cultured family, the Herberts, Breton being a protégé of "Sidney's sister, Pembroke's mother," whom Browne (and not Ben Jonson, as is commonly said) eulogised thus in elegy. George Wither, being Browne's intimate friend, was presumably not unappreciated by the kinsfolk of George Herbert. Thus do they appear as in a bond of spiritual union.

Breton, a step-son to the poet Gascoigne, and the elder of our fascinating trio, is conspicuous for an unswerving, whole-hearted attachment to nature and rural scenes. It is in the pastoral lyric where, with tenderest devotion, he pursues, untrammelled, a light and free-born fancy. His fertile, varied muse, laden with the passionate exaggerations of love-lorn swain, is yet charged with richest imagery and thought, full to overflowing with joyous abandonment, and sweet with the perfume of many flowers, culled in distant fields.

Wither, though best remembered by exploits in the political arena, is none the less a poet of deep and purest feeling. To be sure, his best and earlier work has all of that delightful extravagance and amorous colouring peculiar to the age. But there is reflected a homely dignity and mobile, felicitous vein in which the poet seems endowed with every attribute of a melodist. Exquisite, graceful and diverse he, at times, would soar to flights of highest inspiration and bedeck the page with gems of rarest worth. In the heptasyllabic couplet he is decidedly successful.

And lastly William Browne, than whom we have not a more modest and retiring singer, here makes his bow with a slender portfolio of excerpts. Whatever else may transpire it is certain that labour such as his bears the assurance of unsullied happiness and overflowing joy. It is quaint, simple, unassuming; without affectation, full of pathos, and gently sensitive. He was a man who knew no guile, and his sweet and artless nature is faithfully portrayed in the outpourings of an impressionable, poetic soul. To dance with rustic maidens on the lea; to sing by moonlight to the piper's strain; to be happy, always happy, such is the theme, delicate and refined, of these our half-forgotten poets.

With some sweet harmony:

The weary eye is not to keep

Thou knowest my heaviness:

Beauty is born but to beguile

My heart of happiness....