Passages from a Relinquished Work (From "Mosses from an Old Manse") 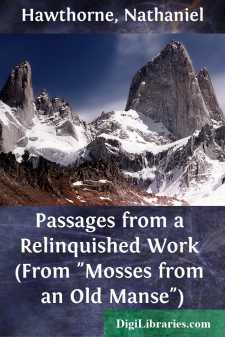 From infancy I was under the guardianship of a village parson, who made me the subject of daily prayer and the sufferer of innumerable stripes, using no distinction, as to these marks of paternal love, between myself and his own three boys. The result, it must be owned, has been very different in their cases and mine, they being all respectable men and well settled in life; the eldest as the successor to his father's pulpit, the second as a physician, and the third as a partner in a wholesale shoe-store; while I, with better prospects than either of them, have run the course which this volume will describe. Yet there is room for doubt whether I should have been any better contented with such success as theirs than with my own misfortunes,—at least, till after my experience of the latter had made it too late for another trial.

My guardian had a name of considerable eminence, and fitter for the place it occupies in ecclesiastical history than for so frivolous a page as mine. In his own vicinity, among the lighter part of his hearers, he was called Parson Thumpcushion, from the very forcible gestures with which he illustrated his doctrines. Certainly, if his powers as a preacher were to be estimated by the damage done to his pulpit-furniture, none of his living brethren, and but few dead ones, would have been worthy even to pronounce a benediction after him. Such pounding and expounding the moment he began to grow warm, such slapping with his open palm, thumping with his closed fist, and banging with the whole weight of the great Bible, convinced me that he held, in imagination, either the Old Nick or some Unitarian infidel at bay, and belabored his unhappy cushion as proxy for those abominable adversaries. Nothing but this exercise of the body while delivering his sermons could have supported the good parson's health under the mental toil which they cost him in composition.

Though Parson Thumpcushion had an upright heart, and some called it a warm one, he was invariably stern and severe, on principle, I suppose, to me. With late justice, though early enough, even now, to be tinctured with generosity I acknowledge him to have been a good and wise man after his own fashion. If his management failed as to myself, it succeeded with his three sons; nor, I must frankly say, could any mode of education with which it was possible for him to be acquainted have made me much better than what I was or led me to a happier fortune than the present. He could neither change the nature that God gave me nor adapt his own inflexible mind to my peculiar character. Perhaps it was my chief misfortune that I had neither father nor mother alive; for parents have an instinctive sagacity in regard to the welfare of their children, and the child feels a confidence both in the wisdom and affection of his parents which he cannot transfer to any delegate of their duties, however conscientious. An orphan's fate is hard, be he rich or poor. As for Parson Thumpcushion, whenever I see the old gentleman in my dreams he looks kindly and sorrowfully at me, holding out his hand as if each had something to forgive....