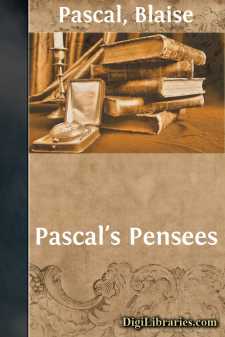 It might seem that about Blaise Pascal, and about the two works on which his fame is founded, everything that there is to say had been said. The details of his life are as fully known as we can expect to know them; his mathematical and physical discoveries have been treated many times; his religious sentiment and his theological views have been discussed again and again; and his prose style has been analysed by French critics down to the finest particular. But Pascal is one of those writers who will be and who must be studied afresh by men in every generation. It is not he who changes, but we who change. It is not our knowledge of him that increases, but our world that alters and our attitudes towards it. The history of human opinions of Pascal and of men of his stature is a part of the history of humanity. That indicates his permanent importance.

The facts of Pascal's life, so far as they are necessary for this brief introduction to the Pensées, are as follows. He was born at Clermont, in Auvergne, in 1623. His family were people of substance of the upper middle class. His father was a government official, who was able to leave, when he died, a sufficient patrimony to his one son and his two daughters. In 1631 the father moved to Paris, and a few years later took up another government post at Rouen. Wherever he lived, the elder Pascal seems to have mingled with some of the best society, and with men of eminence in science and the arts. Blaise was educated entirely by his father at home. He was exceedingly precocious, indeed excessively precocious, for his application to studies in childhood and adolescence impaired his health, and is held responsible for his death at thirty-nine. Prodigious, though not incredible stories are preserved, especially of his precocity in mathematics. His mind was active rather than accumulative; he showed from his earliest years that disposition to find things out for himself, which has characterised the infancy of Clerk-Maxwell and other scientists. Of his later discoveries in physics there is no need for mention here; it must only be remembered that he counts as one of the greatest physicists and mathematicians of all time; and that his discoveries were made during the years when most scientists are still apprentices.

The elder Pascal, Étienne, was a sincere Christian. About 1646 he fell in with some representatives of the religious revival within the Church which has become known as Jansenism—after Jansenius, Bishop of Ypres, whose theological work is taken as the origin of the movement. This period is usually spoken of as the moment of Pascal's "first conversion." The word "conversion," however, is too forcible to be applied at this point to Blaise Pascal himself. The family had always been devout, and the younger Pascal, though absorbed in his scientific work, never seems to have been afflicted with infidelity. His attention was then directed, certainly, to religious and theological matters; but the term "conversion" can only be applied to his sisters—the elder, already Madame Périer, and particularly the younger, Jacqueline, who at that time conceived a vocation for the religious life. Pascal himself was by no means disposed to renounce the world. After the death of the father in 1650 Jacqueline, a young woman of remarkable strength and beauty of character, wished to take her vows as a sister of Port-Royal, and for some time her wish remained unfulfilled owing to the opposition of her brother. His objection was on the purely worldly ground that she wished to make over her patrimony to the Order; whereas while she lived with him, their combined resources made it possible for him to live more nearly on a scale of expense congenial to his tastes. He liked, in fact, not only to mix with the best society, but to keep a coach and horses—six horses is the number at one time attributed to his carriage. Though he had no legal power to prevent his sister from disposing of her property as she elected, the amiable Jacqueline shrank from doing so without her brother's willing approval. The Mother Superior, Mère Angélique—herself an eminent personage in the history of this religious movement—finally persuaded the young novice to enter the order without the satisfaction of bringing her patrimony with her; but Jacqueline remained so distressed by this situation that her brother finally relented.

So far as is known, the worldly life enjoyed by Pascal during this period can hardly be qualified as "dissipation," and certainly not as "debauchery." Even gambling may have appealed to him chiefly as affording a study of mathematical probabilities. He appears to have led such a life as any cultivated intellectual man of good position and independent means might lead and consider himself a model of probity and virtue. Not even a love-affair is laid at his door, though he is said to have contemplated marriage. But Jansenism, as represented by the religious society of Port-Royal, was morally a Puritan movement within the Church, and its standards of conduct were at least as severe as those of any Puritanism in England or America....