Pantheism, Its Story and Significance Religions Ancient and Modern 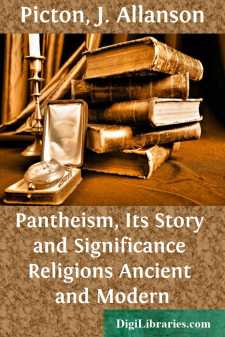 Its Origins Doubtful and Unimportant.

It has been the customary and perhaps inevitable method of writers on Pantheism to trace its main idea back to the dreams of Vedic poets, the musings of Egyptian priests, and the speculations of the Greeks. But though it is undeniable that the divine unity of all Being was an almost necessary issue of earliest human thought upon the many and the one, yet the above method of treating Pantheism is to some extent misleading; and therefore caution is needed in using it. For the revival of Pantheism at the present day is much more a tangible resultant of action and reaction between Science and Religion than a ghost conjured up by speculation. Thus, religious belief, driven out from "the darkness and the cloud" of Sinai, takes refuge in the mystery of matter; and if the glory passes from the Mount of Transfiguration, it is because it expands to etherialise the whole world as the garment of God. Again, the evanescence of the atom into galaxies of "electrons" destroys the only physical theory that ever threatened us with Atheism; and the infinitesimal electrons themselves open up an immeasurable perspective into the abyss of an Unknowable in which all things "live and move and have their being." Therefore it matters little to us, except as a matter of antiquarian interest, to know what the Vedic singers may have dreamed; or what Thales or Xenophanes or Parmenides may have thought about the first principle of things, or about the many and the one. For our spiritual genealogy is not from them, but from a nearer and double line of begetters, including seers—in the true sense of the word—and saints, for both are represented by Kepler and Hooker, Newton and Jeremy Taylor, Descartes and Spinoza, Leibnitz and Wesley, Spencer and Newman. The Secret of Pantheism is Within us. And even these have authority not through any divine right of genius or acquired claim of learning, but because they illumine and interpret obscure suggestions of our own thoughts. Indeed, to the sacrament of historic communion with the past, as well as to the chief rite of the Church, the apostolic injunction is applicable: "Let a man examine himself; and so let him eat of that bread."

Obeying that injunction, any man possessing ordinary powers of Suggestions of Nature. observation and reflection may, in the course of a summer day's walk, find abundant reason for interest in the speculations of historic Pantheism. For the aspect of nature then presented to him is one both of movement and repose, of variety and harmony, of multiplicity and unity. Thus the slight breeze, scarcely stirring the drowsy flowery the monotonous cadences of the stony brook, and the gliding of feathery flecks of cloud across the blue, create a peace far deeper than absolute stillness, and suggest an infinite life in which activity and repose are one. Besides, there is evident everywhere an interplay of forces acting and reacting so as mutually to help and fulfil one another....