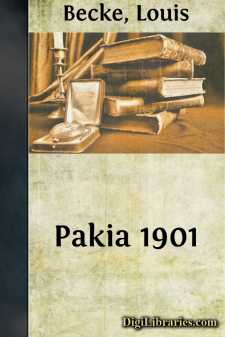 Late one evening, when the native village was wrapped in slumber, Temana and I brought our sleeping-mats down to the boat-shed, and spread them upon the white, clinking sand. For here, out upon the open beach, we could feel a breath of the cooling sea-breeze, denied to the village houses by reason of the thick belt of palms which encompassed them on three sides. And then we were away from Malepa's baby, which was a good thing in itself.

Temana, tall, smooth-limbed, and brown-skinned, was an excellent savage, and mine own good friend. He and his wife Malepa lived with me as a sort of foster-father and mother, though their united ages did not reach mine by a year or two.

When Malepa's first baby was born, she and her youthful husband apologised sincerely for the offence against my comfort, and with many tears prepared to leave my service. But although I was agreeable to let Malepa and her little bundle of red-skinned wrinkles go, I could not part with Temana, so I bade her stay. She promised not to let the baby cry o' nights. Poor soul. She tried her best; but every night—or rather towards daylight—that terrible infant would raise its fearsome voice, and wail like a foghorn in mortal agony.

We lit our pipes and lay back watching a moon of silvered steel poised 'midships in a cloudless sky. Before us, unbroken in its wide expanse, save for two miniature islets near the eastern horn of the encircling reef, the glassy surface of the sleeping lagoon was beginning to quiver and throb to the muffled call of the outer ocean; for the tide was about to turn, and soon the brimming waters would sink inch by inch, and foot by foot from the hard, white sand, and with strange swirlings and bubblings and mighty eddyings go tearing through the narrow passage at eight knots an hour.

Presently we heard a footfall upon the path which led to the boat-shed, and then an old man, naked but for his titi, or waist-girdle of grass, came out into the moonlight, and greeted us in a quavering, cracked voice.

"Aue! white man, my dear friend. So thou and Temana sit here in the moonlight!"

"Even so, Pàkfa, most excellent and good old man. Sit ye here beside us. Nay, not there, but here on mine own mat. So. Hast thy pipe with thee?"

The ancient chuckled, and his wrinkled old face beamed as he untwisted a black and stumpy clay from his perforated and pendulous ear-lobe, which hung full down upon his shoulder, and, turning it upside down, tapped the palm of his left hand with it.

"See!" he said, with another wheezing, half-whispered, half-strangled laugh, "see and hear the emptiness thereof! Nothing has been in its belly since cockcrow. And until now have I hungered for a smoke. Twice did I think to come to thee to-day and ask thee for kaitalafu (credit) for five sticks of tobacco, but I said to my pipe, 'Nay, let us wait till night time.' For see, friend of my heart, there are ever greedy eyes which watch the coming and going of a poor old man; and had I gotten the good God-given tobacco from thee by daylight, friends would arise all around me as I passed through the village to my house. And then, lo, the five sticks would become but one!"

"Pâkia," I said in English, as I gave him a piece of tobacco and my knife, "you are a philosopher."

He stopped suddenly, and placing one hand on my knee, looked wistfully into my face, as an inquiring child looks into the eyes of its mother.