Pagan and Christian creeds: their origin and meaning 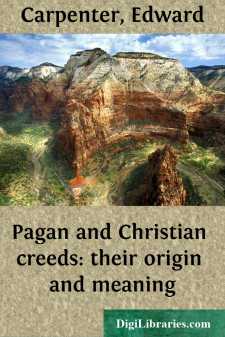 The subject of Religious Origins is a fascinating one, as the great multitude of books upon it, published in late years, tends to show. Indeed the great difficulty to-day in dealing with the subject, lies in the very mass of the material to hand—and that not only on account of the labor involved in sorting the material, but because the abundance itself of facts opens up temptation to a student in this department of Anthropology (as happens also in other branches of general Science) to rush in too hastily with what seems a plausible theory. The more facts, statistics, and so forth, there are available in any investigation, the easier it is to pick out a considerable number which will fit a given theory. The other facts being neglected or ignored, the views put forward enjoy for a time a great vogue. Then inevitably, and at a later time, new or neglected facts alter the outlook, and a new perspective is established.

There is also in these matters of Science (though many scientific men would doubtless deny this) a great deal of "Fashion". Such has been notoriously the case in Political Economy, Medicine, Geology, and even in such definite studies as Physics and Chemistry. In a comparatively recent science, like that with which we are now concerned, one would naturally expect variations. A hundred and fifty years ago, and since the time of Rousseau, the "Noble Savage" was extremely popular; and he lingers still in the story books of our children. Then the reaction from this extreme view set in, and of late years it has been the popular cue (largely, it must be said, among "armchair" travelers and explorers) to represent the religious rites and customs of primitive folk as a senseless mass of superstitions, and the early man as quite devoid of decent feeling and intelligence. Again, when the study of religious origins first began in modern times to be seriously taken up—say in the earlier part of last century—there was a great boom in Sungods. Every divinity in the Pantheon was an impersonation of the Sun—unless indeed (if feminine) of the Moon. Apollo was a sungod, of course; Hercules was a sungod; Samson was a sungod; Indra and Krishna, and even Christ, the same. C. F. Dupuis in France (Origine de tous les Cultes, 1795), F. Nork in Germany (Biblische Mythologie, 1842), Richard Taylor in England (The Devil's Pulpit, (1) 1830), were among the first in modern times to put forward this view. A little later the PHALLIC explanation of everything came into fashion. The deities were all polite names for the organs and powers of procreation. R. P. Knight (Ancient Art and Mythology, 1818) and Dr. Thomas Inman (Ancient Faiths and Ancient Names, 1868) popularized this idea in England; so did Nork in Germany. Then again there was a period of what is sometimes called Euhemerism—the theory that the gods and goddesses had actually once been men and women, historical characters round whom a halo of romance and remoteness had gathered. Later still, a school has arisen which thinks little of sungods, and pays more attention to Earth and Nature spirits, to gnomes and demons and vegetation-sprites, and to the processes of Magic by which these (so it was supposed) could be enlisted in man's service if friendly, or exorcised if hostile.