P.'s Correspondence (From "Mosses from an Old Manse") 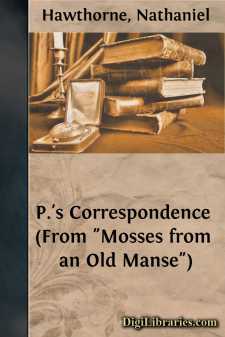 My unfortunate friend P. has lost the thread of his life by the interposition of long intervals of partially disordered reason. The past and present are jumbled together in his mind in a manner often productive of curious results, and which will be better understood after the perusal of the following letter than from any description that I could give. The poor fellow, without once stirring from the little whitewashed, iron-grated room to which he alludes in his first paragraph, is nevertheless a great traveller, and meets in his wanderings a variety of personages who have long ceased to be visible to any eye save his own. In my opinion, all this is not so much a delusion as a partly wilful and partly involuntary sport of the imagination, to which his disease has imparted such morbid energy that he beholds these spectral scenes and characters with no less distinctness than a play upon the stage, and with somewhat more of illusive credence. Many of his letters are in my possession, some based upon the same vagary as the present one, and others upon hypotheses not a whit short of it in absurdity. The whole form a series of correspondence, which, should fate seasonably remove my poor friend from what is to him a world of moonshine, I promise myself a pious pleasure in editing for the public eye. P. had always a hankering after literary reputation, and has made more than one unsuccessful effort to achieve it. It would not be a little odd, if, after missing his object while seeking it by the light of reason, he should prove to have stumbled upon it in his misty excursions beyond the limits of sanity.

MY DEAR FRIEND: Old associations cling to the mind with astonishing tenacity. Daily custom grows up about us like a stone wall, and consolidates itself into almost as material an entity as mankind's strongest architecture. It is sometimes a serious question with me whether ideas be not really visible and tangible, and endowed with all the other qualities of matter. Sitting as I do at this moment in my hired apartment, writing beside the hearth, over which hangs a print of Queen Victoria, listening to the muffled roar of the world's metropolis, and with a window at but five paces distant, through which, whenever I please, I can gaze out on actual London,—with all this positive certainty as to my whereabouts, what kind of notion, do you think, is just now perplexing my brain? Why,—would you believe it?—that all this time I am still an inhabitant of that wearisome little chamber,—that whitewashed little chamber,—that little chamber with its one small window, across which, from some inscrutable reason of taste or convenience, my landlord had placed a row of iron bars,—that same little chamber, in short, whither your kindness has so often brought you to visit me! Will no length of time or breadth of space enfranchise me from that unlovely abode? I travel; but it seems to be like the snail, with my house upon my head. Ah, well! I am verging, I suppose, on that period of life when present scenes and events make but feeble impressions in comparison with those of yore; so that I must reconcile myself to be more and more the prisoner of Memory, who merely lets me hop about a little with her chain around my leg.

My letters of introduction have been of the utmost service, enabling me to make the acquaintance of several distinguished characters who, until now, have seemed as remote from the sphere of my personal intercourse as the wits of Queen Anne's time or Ben Jenson's compotators at the Mermaid. One of the first of which I availed myself was the letter to Lord Byron. I found his lordship looking much older than I had anticipated, although, considering his former irregularities of life and the various wear and tear of his constitution, not older than a man on the verge of sixty reasonably may look. But I had invested his earthly frame, in my imagination, with the poet's spiritual immortality. He wears a brown wig, very luxuriantly curled, and extending down over his forehead. The expression of his eyes is concealed by spectacles. His early tendency to obesity having increased, Lord Byron is now enormously fat,—so fat as to give the impression of a person quite overladen with his own flesh, and without sufficient vigor to diffuse his personal life through the great mass of corporeal substance which weighs upon him so cruelly. You gaze at the mortal heap; and, while it fills your eye with what purports to be Byron, you murmur within yourself, "For Heaven's sake, where is he?" Were I disposed to be caustic, I might consider this mass of earthly matter as the symbol, in a material shape, of those evil habits and carnal vices which unspiritualize man's nature and clog up his avenues of communication with the better life....