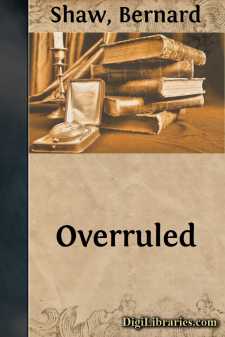 THE ALLEVIATIONS OF MONOGAMY.

This piece is not an argument for or against polygamy. It is a clinical study of how the thing actually occurs among quite ordinary people, innocent of all unconventional views concerning it. The enormous majority of cases in real life are those of people in that position. Those who deliberately and conscientiously profess what are oddly called advanced views by those others who believe them to be retrograde, are often, and indeed mostly, the last people in the world to engage in unconventional adventures of any kind, not only because they have neither time nor disposition for them, but because the friction set up between the individual and the community by the expression of unusual views of any sort is quite enough hindrance to the heretic without being complicated by personal scandals. Thus the theoretic libertine is usually a person of blameless family life, whilst the practical libertine is mercilessly severe on all other libertines, and excessively conventional in professions of social principle.

What is more, these professions are not hypocritical: they are for the most part quite sincere. The common libertine, like the drunkard, succumbs to a temptation which he does not defend, and against which he warns others with an earnestness proportionate to the intensity of his own remorse. He (or she) may be a liar and a humbug, pretending to be better than the detected libertines, and clamoring for their condign punishment; but this is mere self-defence. No reasonable person expects the burglar to confess his pursuits, or to refrain from joining in the cry of Stop Thief when the police get on the track of another burglar. If society chooses to penalize candor, it has itself to thank if its attack is countered by falsehood. The clamorous virtue of the libertine is therefore no more hypocritical than the plea of Not Guilty which is allowed to every criminal. But one result is that the theorists who write most sincerely and favorably about polygamy know least about it; and the practitioners who know most about it keep their knowledge very jealously to themselves. Which is hardly fair to the practice.

INACCESSIBILITY OF THE FACTS.

Also it is impossible to estimate its prevalence. A practice to which nobody confesses may be both universal and unsuspected, just as a virtue which everybody is expected, under heavy penalties, to claim, may have no existence. It is often assumed—indeed it is the official assumption of the Churches and the divorce courts that a gentleman and a lady cannot be alone together innocently. And that is manifest blazing nonsense, though many women have been stoned to death in the east, and divorced in the west, on the strength of it. On the other hand, the innocent and conventional people who regard the gallant adventures as crimes of so horrible a nature that only the most depraved and desperate characters engage in them or would listen to advances in that direction without raising an alarm with the noisiest indignation, are clearly examples of the fact that most sections of society do not know how the other sections live....