Overdue The Story of a Missing Ship 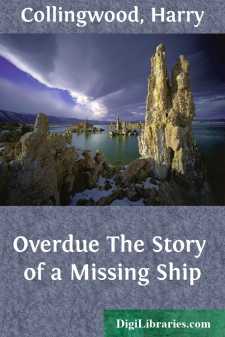 This is a yarn of the days when the clipper sailing-ship was at the zenith of her glory and renown; when she was the recognised medium for the transport of passengers—ay, and, very frequently, of mails between Great Britain and the Colonies; and when steamers were, comparatively speaking, rare objects on the high seas. True, a few of the great steamship lines, such as the Cunard and the Peninsular and Oriental, were already in existence; but their fleets were only just beginning to compete, and with but a very limited measure of success, against the superb specimens of marine architecture owned by the Black Ball and other famous lines of sailing clippers. For the Suez Canal had not yet been dug, and—apart from the overland journeys to India—travellers bound to the East were compelled to go south-about round the Cape of Good Hope, whether they journeyed by steamer or by sailing-ship; and it was no very uncommon thing for the latter to beat the former on the passage to India, China, or Australia. Moreover, the marine steam engine was, at that period, a very expensive piece of machinery to operate, developing only a very moderate amount of power upon an exceedingly heavy consumption of coal; hence it was only the nabobs who could afford to indulge in the then costly luxury of ocean travel by steam.

The occurrence which I regard as the starting-point of my extraordinary yarn happened on the 27th day of October, in the year of grace 18—; the Salamis—which was the ship in which it originated—being, at noon of that day, in latitude 30 degrees south, and longitude 23 degrees west, or thereabout; thirty days out from London, on a voyage to Melbourne.

The Salamis, I may explain, was a full-rigged clipper ship of 1497 tons register, classed 100 A 1; being one of the crack vessels of the celebrated Gold Star Line, outward bound to Melbourne, as I have said, with a full complement of saloon and steerage passengers, and a general cargo that, while it filled her to the hatches, was so largely composed of light merchandise that it only sank her in the water to her very finest sailing trim; of which circumstance Captain Martin, her commander, was taking the fullest possible advantage, by “carrying on” day and night, in the hope of making a record passage. I, Philip Troubridge, was one of her midshipman-apprentices, of whom she carried six, and I was seventeen years of age on the day when the occurrence happened which I have alluded to above, and which I will now relate.

The Salamis carried three mates: chief, second, and third; and the accident happened in the first watch, when Mr Moore, the second mate, had charge of the deck. The wind was out from about nor’-nor’-west, and had been blowing very fresh all day, notwithstanding which the ship was under all three royals, and fore and main topgallant studdingsails, her course being south-east. There was a heavy and steep sea following the ship on her port quarter, which not only made her motions exceedingly uneasy, but also caused her to yaw wildly from time to time, despite the utmost efforts of two men at the wheel to keep her true to her course....