"Over There" with the Australians 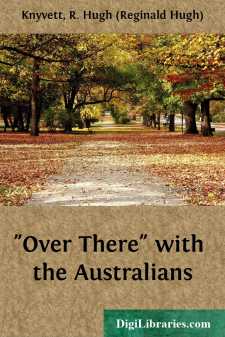 CHAPTER I THE CALL REACHES SOME FAR-OUT AUSTRALIANS

Just where the white man's continent pushes the tip of its horn among the eastern lands there is a black man's land half as large as Mexico that is administered by the government of Australia. New Guinea has all the romance and lure of unexplored regions. It is a country of nature's wonders, a treasure-chest with the lid yet to be raised by some intrepid discoverer. There are tree-climbing fish, and pygmy men, mountains higher and rivers greater than any yet discovered. To the north of Australia's slice of this wonderland the Kaiser was squeezing a hunk of the same island in his mailed fist.

The contrast between the administration of these two portions of the same land forms the best answer to the question: "What shall be done with Germany's colonies?"

In German New Guinea there have always been more soldiers than civilians, cannibalism is rife, and life and property are insecure outside the immediate limits of the barracks. In British New Guinea or Papua there has never been a single soldier and cannibalism is abolished. A white woman, Beatrice Grimshaw, travelled through the greater part of it unprotected and unmolested.

The following story told of Sir William Macgregor, the first administrator, shows the way of Britishers in governing native races. He one day marched into a village where five hundred warriors were assembled for a head-hunting expedition. Sir William, then Doctor Macgregor, had with him two white men and twelve native police. He strode into the centre of these blood-thirsting savages, grasped the chief by the scruff of the neck, kicked him around the circle of his warriors, demanded an immediate apology and the payment of a fine for the transgression of the Great White Mother's orders for peace—the bluff worked, as it always does.

Australia has now added the late German colony Hermanlohe, or German New Guinea, to the southern portion, making an Australian crown colony of about two hundred and fifty thousand square miles. This was taken by a force of Australian troops conveyed in Australian ships. I was not fortunate enough to be a member of the expedition, but the ultimatum issued to the German commandant resulted in the Australian flag flying over the governor's residence at Rabaul within a few hours of the appearance of the Australian ships.

It was soon evident to the Australians that this was intended to be a German naval station and military post of great importance. Enough munition, and accommodation for troops were there to show that it was to be the jumping-off place for an attack on Australia. Such armament could never have been meant merely to impel Kultur on the poor, harmless blacks with their blowpipes and bows and arrows.

Every Australian is determined that these of nature's children shall not come again within reach of German brutality, but that they shall know fair play and good government such as the British race everywhere gives to the "nigger," having a sense of responsibility toward him that the men of this breed cannot escape....