Outback Marriage, an : a story of Australian life

by A. B. (Andrew Barton) Paterson 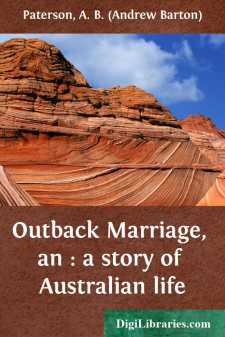 CHAPTER I. IN THE CLUB.

It was a summer's evening in Sydney, and the north-east wind that comes down from New Guinea and the tropical islands over leagues of warm sea, brought on its wings a heavy depressing moisture. In the streets people walked listlessly, perspired, mopped themselves, and abused their much-vaunted climate. Everyone who could manage it was out of town, either on the heights of Moss Vale or the Blue Mountains, escaping from the Inferno of Sydney.

In the Cassowary Club, weary, pallid waiters brought iced drinks to such of the members as were condemned to spend the summer in town. The gong had sounded, and in ones and twos members shuffled out of the smoking-room, and went in to dinner. At last only three were left talking at the far end of the big, empty smoking-room, like three small stage conspirators at the end of a very large robbers' cavern.

One was a short, fat, red-faced man, who looked like a combination of sea-captain and merchant, and who was the local representative of a big English steamship company. His connection with the mercantile marine had earned him his nickname of "The Bo'sun." By his side sat Pinnock, a lean and bilious-looking solicitor; the third man was an English globe-trotter, a colourless sort of person, of whom no one took any particular notice until they learnt that he was the eldest son of a big Scotch whisky manufacturer, and had £10,000 a year of his own. Then they suddenly discovered that he was a much smarter fellow than he looked. The three were evidently waiting for somebody. The "Bo'sun" had a grievance, and was relieving his mind by speech. He walked up and down between the smoking-room chairs, brandishing a telegram as he talked, while the attorney and the globe-trotter lay back on the lounge and admired his energy.

"I call it a shame," he said, facing round on them suddenly; "I could have got up to Moss Vale for a day or two, and now old Grant of Kuryong wires me to meet and entertain a new chum. Just listen to this: 'Young Carew, friend of mine, on Carthaginia. Will you meet him and show him round; oblige me—W. G. Grant.' I met the old fellow once or twice at dinner, when he was in town for the sheep sales, and on the strength of that he foists an unknown callow new chum on to me. People are always doing that kind of thing."

"Leave his friend alone, then," said Pinnock; "don't have anything to do with him. I know his sort—Government House young man the first week, Coffee Palace at two shillings a night the second week, boiler on the wharf the third week, Central Police Court the fourth week, and then exit so far as all decent people are concerned."

The Bo'sun stuffed the telegram into his pocket and sat down.

"Oh, I don't suppose he'll be so bad," he said. "I've asked him here to-night to see what he's like, and if he's no good I'll drop him. It's the principle I object to. Country people are always at this sort of thing. They'd ask me to meet an Alderney bull and entertain him till they send for him. What am I to do with an unknown new chum?...