Out To Win The Story of America in France 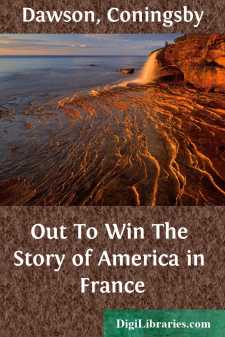 I "WE'VE GOT FOUR YEARS"

The American Troops have set words to one of their bugle calls. These words are indicative of their spirit—of the calculated determination with which they have faced up to their adventure: an adventure unparalleled for magnitude in the history of their nation.

That is the spirit of America. Her soldiers give her four years, but to judge from the scale of her preparations she might be planning for thirty.

America is out to win. I write this opening sentence in Paris where I am temporarily absent from my battery, that I may record the story of America's efforts in France. My purpose is to prove with facts that America is in the war to her last dollar, her last man, and for just as long as Germany remains unrepentant. Her strength is unexpended, her spirit is un-war-weary. She has a greater efficient man-power for her population than any nation that has yet entered the arena of hostilities. Her resources are continental rather than national; it is as though a new and undivided Europe had sprung to arms in moral horror against Germany. She has this to add fierceness to her soul—the reproach that she came in too late. That reproach is being wiped out rapidly by the scarlet of self-imposed sacrifice. She did come in late—for that very reason she will be the last of Germany's adversaries to withdraw.

She did not want to come in at all. Many of her hundred million population emigrated to her shores out of hatred of militarism and to escape from just such a hell as is now raging in Europe. At first it seemed a far cry from Flanders to San Francisco. Philanthropy could stretch that far, but not the risking of human lives. Moreover, the American nation is not racially a unit; it is bound together by its ideal quest for peaceful and democratic institutions. It was a difficult task for any government to convince so remote a people that their destiny was being made molten in the furnace of the Western Front; when once that truth was fully apprehended the diverse souls of America leapt up as one soul and declared for war. In so doing the people of the United States forewent the freedom from fear that they had gained by their journey across the Atlantic; they turned back in their tracks to smite again with renewed strength and redoubled hate the old brutal Fee-Fo-Fum of despotism, from whose clutches they thought they had escaped.

America's is the case of The Terrible Meek; for two and a half years she lulled Germany and astonished the Allies by her abnormal patience. The most terrifying warriors of history have been peace-loving nations hounded into hostility by outraged ideals. Certainly no nation was ever more peace-loving than the American....