Out in the Forty-Five Duncan Keith's Vow 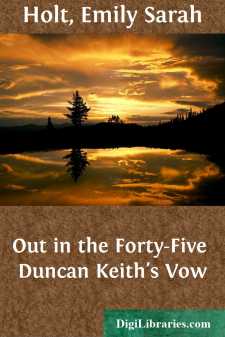 We alight at Brocklebank Fells.

“Girls!” said my Aunt Kezia, looking round at us, “I should just like to know what is to come of the whole four of you!”

My Aunt Kezia has an awful way of looking round at us. She begins with Sophy—she is our eldest—then she goes to Fanny, then to Hatty, and ends up with me. As I am the youngest, I have to be ended up with. She generally lays down her work to do it, too; and sometimes she settles her spectacles first, and that makes it feel more awful than ever. However, when she has gone round, she always takes them off—spectacles, I mean—and wipes them, and gives little solemn shakes of her head while she is doing it, as if she thought we were all four going to ruin together, and had got very near the bottom.

This afternoon, when she said that, instead of sitting quiet, as we generally do, Hatty—she is the pert one amongst us—actually spoke up.

“I should think we shall be married, Aunt Kezia, one of these days—shan’t we?”

“My dear, if you are,” was my Aunt Kezia’s reply, more solemn than ever, “the only wedding present that I shall be conscientiously able to give to those four misguided men will be a rope a-piece to hang themselves with.”

“Oh dear! I do wish she would not!” said Fanny in a plaintive whisper behind me.

“Considering who brought us up, Aunt Kezia,” replied impertinent Hatty, “I should have thought they would have had better bargains than that.”

“Hester, you forget yourself,” said my aunt severely. Then, though she had only just finished wiping her spectacles, she took them off, and wiped them again, with more little shakes of her head. “And I did not bring you all up, neither.”

My cheeks grew hot, for I knew that meant me. My Aunt Kezia did not bring me up, as she did the rest. I was thought sickly in my youth, and as Brocklebank Fells is but a bleak place, I was packed off to Carlisle, where Grandmamma lived, and there I have been with her until six weeks back, when she went to live with Uncle Charles down in the South, and I came home to Brocklebank, being thought to have now outgrown my sickliness. My Aunt Kezia is Father’s sister, and has kept house for him since Mamma died, so of course she is no kin to Grandmamma at all. I know it sounds queer to say “Father and Mamma,” instead of “Father and Mother,” but I cannot help it. Grandmamma would never let me say “Mother;” she said it was old-fashioned and vulgar: and now, when I come back, Father will not hear of my calling him “Papa,” which he says is new-fangled finnicking nonsense. I did not get used, either, to saying “Papa,” as I did “Mamma,” for Grandmamma never seemed to care to hear about him; I don’t believe she liked him. She never seemed to want to hear about anything at Brocklebank....