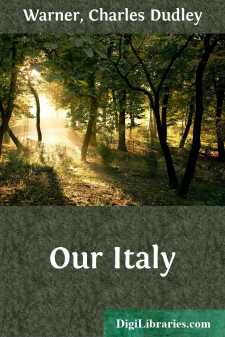 CHAPTER I. HOW OUR ITALY IS MADE.

The traveller who descends into Italy by an Alpine pass never forgets the surprise and delight of the transition. In an hour he is whirled down the slopes from the region of eternal snow to the verdure of spring or the ripeness of summer. Suddenly—it may be at a turn in the road—winter is left behind; the plains of Lombardy are in view; the Lake of Como or Maggiore gleams below; there is a tree; there is an orchard; there is a garden; there is a villa overrun with vines; the singing of birds is heard; the air is gracious; the slopes are terraced, and covered with vineyards; great sheets of silver sheen in the landscape mark the growth of the olive; the dark green orchards of oranges and lemons are starred with gold; the lusty fig, always a temptation as of old, leans invitingly over the stone wall; everywhere are bloom and color under the blue sky; there are shrines by the way-side, chapels on the hill; one hears the melodious bells, the call of the vine-dressers, the laughter of girls.

The contrast is as great from the Indians of the Mojave Desert, two types of which are here given, to the vine-dressers of the Santa Ana Valley.

Italy is the land of the imagination, but the sensation on first beholding it from the northern heights, aside from its associations of romance and poetry, can be repeated in our own land by whoever will cross the burning desert of Colorado, or the savage wastes of the Mojave wilderness of stone and sage-brush, and come suddenly, as he must come by train, into the bloom of Southern California. Let us study a little the physical conditions.

The bay of San Diego is about three hundred miles east of San Francisco. The coast line runs south-east, but at Point Conception it turns sharply east, and then curves south-easterly about two hundred and fifty miles to the Mexican coast boundary, the extreme south-west limits of the United States, a few miles below San Diego. This coast, defined by these two limits, has a southern exposure on the sunniest of oceans. Off this coast, south of Point Conception, lies a chain of islands, curving in position in conformity with the shore, at a distance of twenty to seventy miles from the main-land. These islands are San Miguel, Santa Rosa, Santa Cruz, Anacapa, Santa Barbara, San Nicolas, Santa Catalina, San Clemente, and Los Coronados, which lie in Mexican waters. Between this chain of islands and the main-land is Santa Barbara Channel, flowing northward. The great ocean current from the north flows past Point Conception like a mill-race, and makes a suction, or a sort of eddy. It approaches nearer the coast in Lower California, where the return current, which is much warmer, flows northward and westward along the curving shore. The Santa Barbara Channel, which may be called an arm of the Pacific, flows by many a bold point and lovely bay, like those of San Pedro, Redondo, and Santa Monica; but it has no secure harbor, except the magnificent and unique bay of San Diego.