Our Catholic Heritage in English Literature of Pre-Conquest Days 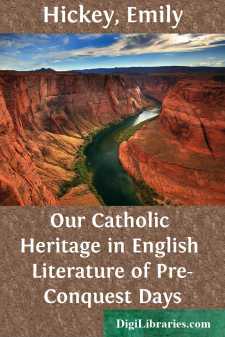 The beginnings of Literature in England. Two poets of the best period of our old poetry, Caedmon and Cynewulf. The language they wrote in. The monastery at Whitby. The story of Caedmon's gift of song.

How many of us I wonder, realise in anything like its full extent the beauty and the glory of our Catholic heritage. Do we think how the Great Mother, the keeper of truth, the guardian of beauty, the muse of learning, the fosterer of progress, has given us gifts in munificent generosity, gifts that sprang from her holy bosom, to enlighten, to cheer, to guide and to help; gifts that she, large, liberal, glorious, could not but give, for she, like her Lord, is giver and bestower; and to be of her children is to be of the givers and bestowers. The Catholic Church is the source of fine literature, of true art, as of noble speech and noble deed.

We are going to look at a small portion of that part of our Catholic heritage which consists of our early literature; we are going to think about the beginning of Christian work of this kind in the form of poetry and prose in England. When I say Christian poetry and prose, I am using the word Christian as opposed to pagan, and inclusive of secular as well as religious verse, though the amount of secular verse is, in the earliest time, comparatively very small. Some of the pagan work was retouched by Christians who cared for the truth and strength and beauty of it. The ideal of the English heathen poet was, in many respects, a fine one. He loved valour and generosity and loyalty, and all these things are found, for instance, in the poem "Béowulf," a poem full of interest of various kinds; full, too, as Professor Harrison says, "of evidences of having been fumigated here and there by a Christian incense-bearer." But "the poem is a heathen poem, just 'fumigated' here and there by its editor." There is a vast difference between "fumigating" a heathen work and adapting it to blessedly changed belief, seeing in old story the potential vessel of Christian thought and Christian teaching. To fumigate with incense is one thing—to use that incense in the work of dedication and consecration is another. For instance, the old story of the "Quest of the Graal," best known to modern readers through Tennyson's "Idylls of the King," has been Christianised and consecrated. And so it was with some fine old English (or Anglo-Saxon) poetry. But, just now, we are going to listen to Catholic poets and teachers only.

We begin with the work of poets. Out of all those who wrote in what was the best period of our old poetry, a period that lasted some hundred and fifty or seventy-five years, we know the names of two only, Caedmon and Cynewulf.

And here may I say that scholars agree that the names are to be pronounced Kadmon and Kun-e-wolf; in the second name we sound the y like a French u, make a syllable of the e, not sounding it as ee, but short, and make the last syllable just what we now pronounce as wolf.

Both of these poets deserve our love and our praise, as singers and inspirers of other singers, but we know much more about Caedmon's life than we know about his share in the poetry that has been attributed to him; that is the poetry which has gone under his name....