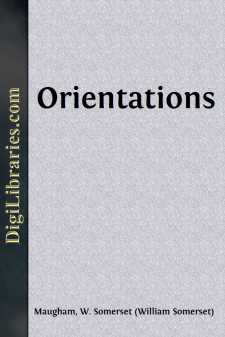 Xiormonez is the most inaccessible place in Spain. Only one train arrives there in the course of the day, and that arrives at two o'clock in the morning; only one train leaves it, and that starts an hour before sunrise. No one has ever been able to discover what happens to the railway officials during the intermediate one-and-twenty hours. A German painter I met there, who had come by the only train, and had been endeavouring for a fortnight to get up in time to go away, told me that he had frequently gone to the station in order to clear up the mystery, but had never been able to do so; yet, from his inquiries, he was inclined to suspect—that was as far as he would commit himself, being a cautious man—that they spent the time in eating garlic and smoking execrable cigarettes. The guide-books tell you that Xiormonez possesses the eyebrows of Joseph of Arimathea, a cathedral of the greatest quaintness, and battlements untouched since their erection in the fourteenth century. And they strongly advise you to visit it, but recommend you before doing so to add Keating's insect powder to your other toilet necessaries.

I was travelling to Madrid in an express train which had been rushing along at the pace of sixteen miles an hour, when suddenly it stopped. I leant out of the window, asking where we were.

'I thought we did not stop at Xiormonez.'

'We do not stop at Xiormonez,' he replied impassively.

'But we are stopping now!'

'That may be; but we are going on again.'

I had already learnt that it was folly to argue with a Spanish guard, and, drawing back my head, I sat down. But, looking at my watch, I saw that it was only ten. I should never again have a chance of inspecting the eyebrows of Joseph of Arimathea unless I chartered a special train, so, seizing the opportunity and my bag, I jumped out.

The only porter told me that everyone in Xiormonez was asleep at that hour, and recommended me to spend the night in the waiting-room, but I bribed him heavily; I offered him two pesetas, which is nearly fifteenpence, and, leaving the train to its own devices, he shouldered my bag and started off.

Along a stony road we walked into the dark night, the wind blowing cold and bitter, and the clouds chasing one another across the sky. In front, I could see nothing but the porter hurrying along, bent down under the weight of my bag, and the wind blew icily. I buttoned up my coat. And then I regretted the warmth of the carriage, the comfort of my corner and my rug; I wished I had peacefully continued my journey to Madrid—I was on the verge of turning back as I heard the whistling of the train. I hesitated, but the porter hurried on, and fearing to lose him in the night, I sprang forwards. Then the puffing of the engine, and on the smoke the bright reflection of the furnace, and the train steamed away; like Abd-er-Rahman, I felt that I had flung my scabbard into the flames.

Still the porter hurried on, bent down under the weight of my bag, and I saw no light in front of me to announce the approach to a town....