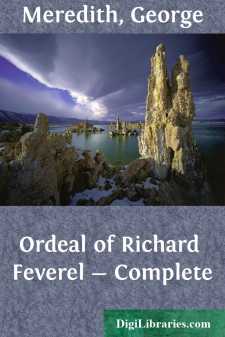 Some years ago a book was published under the title of "The Pilgrim's Scrip." It consisted of a selection of original aphorisms by an anonymous gentleman, who in this bashful manner gave a bruised heart to the world.

He made no pretension to novelty. "Our new thoughts have thrilled dead bosoms," he wrote; by which avowal it may be seen that youth had manifestly gone from him, since he had ceased to be jealous of the ancients. There was a half-sigh floating through his pages for those days of intellectual coxcombry, when ideas come to us affecting the embraces of virgins, and swear to us they are ours alone, and no one else have they ever visited: and we believe them.

For an example of his ideas of the sex he said:

"I expect that Woman will be the last thing civilized by Man."

Some excitement was produced in the bosoms of ladies by so monstrous a scorn of them.

One adventurous person betook herself to the Heralds' College, and there ascertained that a Griffin between two Wheatsheaves, which stood on the title-page of the book, formed the crest of Sir Austin Absworthy Bearne Feverel, Baronet, of Raynham Abbey, in a certain Western county folding Thames: a man of wealth and honour, and a somewhat lamentable history.

The outline of the baronet's story was by no means new. He had a wife, and he had a friend. His marriage was for love; his wife was a beauty; his friend was a sort of poet. His wife had his whole heart, and his friend all his confidence. When he selected Denzil Somers from among his college chums, it was not on account of any similarity of disposition between them, but from his intense worship of genius, which made him overlook the absence of principle in his associate for the sake of such brilliant promise. Denzil had a small patrimony to lead off with, and that he dissipated before he left college; thenceforth he was dependent upon his admirer, with whom he lived, filling a nominal post of bailiff to the estates, and launching forth verse of some satiric and sentimental quality; for being inclined to vice, and occasionally, and in a quiet way, practising it, he was of course a sentimentalist and a satirist, entitled to lash the Age and complain of human nature. His earlier poems, published under the pseudonym of Diaper Sandoe, were so pure and bloodless in their love passages, and at the same time so biting in their moral tone, that his reputation was great among the virtuous, who form the larger portion of the English book-buying public. Election-seasons called him to ballad-poetry on behalf of the Tory party. Dialer possessed undoubted fluency, but did tittle, though Sir Austin was ever expecting much of him.

A languishing, inexperienced woman, whose husband in mental and in moral stature is more than the ordinary height above her, and who, now that her first romantic admiration of his lofty bearing has worn off, and her fretful little refinements of taste and sentiment are not instinctively responded to, is thrown into no wholesome household collision with a fluent man, fluent in prose and rhyme....