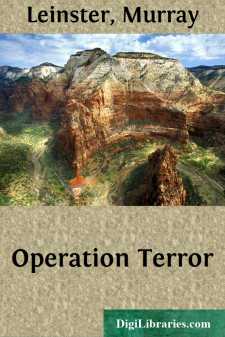 On the morning the radar reported something odd out in space, Lockley awoke at about twenty minutes to eight. That was usual. He'd slept in a sleeping bag on a mountain-flank with other mountains all around. That was not unprecedented. He was there to make a base line measurement for a detailed map of the Boulder Lake National Park, whose facilities were now being built. Measuring a base line, even with the newest of electronic apparatus, was more or less a commonplace job for Lockley.

This morning, though, he woke and realized gloomily that he'd dreamed about Jill Holmes again, which was becoming a habit he ought to break. He'd only met her four times and she was going to marry somebody else. He had to stop.

He stirred, preparatory to getting up. At the same moment, certain things were happening in places far away from him. As yet, no unusual object in space had been observed. That would come later. But far away up at the Alaskan radar complex a man on duty watch was relieved by another. The relief man took over the monitoring of the giant, football-field-sized radar antenna that recorded its detections on magnetic tape. It happened that on this particular morning only one other radar watched the skies along a long stretch of the Pacific Coast. There was the Alaskan installation, and the other was in Oregon. It was extremely unusual for only those two to be operating. The people who knew about it, or most of them, thought that official orders had somehow gone astray. Where the orders were issued, nothing out of the ordinary appeared. All was normal, for example, in the Military Information Center in Denver. The Survey saw nothing unusual in Lockley's being at his post, and other men at places corresponding to his in the area which was to become Boulder Lake National Park. It also seemed perfectly natural that there should be bulldozer operators, surveyors, steelworkers, concrete men and so on, all comfortably at breakfast in the construction camp for the project. Everything seemed normal everywhere.

Up to the time the Alaskan installation reported something strange in space, the state of things generally was neither alarming nor consoling. But at 8:02 a.m. Pacific time, the situation changed. At that time Alaska reported an unscheduled celestial object of considerable size, high out of atmosphere and moving with surprising slowness for a body in space. Its course was parabolic and it would probably land somewhere in South Dakota. It might be a bolide—a large, slow-moving meteorite. It wasn't likely, but the entire report was improbable.

The message reached the Military Information Center in Denver at 8:05 a.m. By 8:06 it had been relayed to Washington and every plane on the Pacific Coast was ordered aloft. The Oregon radar unit reported the same object at 8:07 a.m. It said the object was seven hundred fifty miles high, four hundred miles out at sea, and was headed toward the Oregon coastline, moving northwest to southeast. There was no major city in its line of travel....