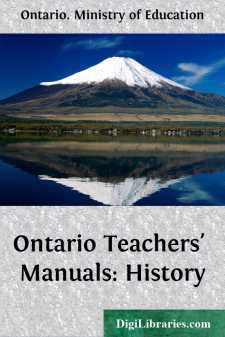 CHAPTER I THE AIMS AND STAGES OF STUDY AIMS

History may be made, in several ways, an important factor in forming intelligent, patriotic citizens:

(a) It must be remembered that society, with all its institutions, is a growth, not a sudden creation. It follows that, if we wish to understand the present and to use that knowledge as a guide to future action, we must know the story of how our present institutions and conditions have come to be what they are; we must know the ideals of our forefathers, the means they took to realize them, and to what extent they succeeded. It is only in this way that we become capable of passing judgment, as citizens, on what is proposed by political and social reformers, and thus justify and guarantee our existence as a democracy.

(b) Patriotism, which depends largely on the associations formed in childhood, is intensified by learning how our forefathers fought and laboured and suffered to obtain all that we now value most in our homes and social life. The courage with which the early settlers of Upper Canada faced their tremendous labours and hardships should make us appreciate our inheritance in the Ontario of to-day, and determine, as they did, to leave our country better than we found it.

To-morrow yet would reap to-day,As we bear blossom of the dead.

(c) "History teaches that right and wrong are real distinctions." The study of history, especially in the sphere of biography, has a moral value, and much may be done, even in the primary classes, to inspire children to admire the heroic and the self-sacrificing, and to despise the treacherous and the self-seeking. The constant struggle to right what is wrong in the world may be emphasized in the senior classes to show that nothing is ever settled until it is settled right.

(d) History affords specially good exercise for the judgment we use in everyday life in weighing evidence and balancing probabilities. Such a question as "Did Champlain do right in taking the side of the Hurons against the Iroquois, or even in taking sides at all?" may be suggested to the older pupils for consideration.

(e) History, when taught by a broad-minded, well-informed teacher, may do much to correct the prejudices—social, political, religious—of individuals and communities.

(f) The imagination is exercised in the effort to recall or reconstruct the scenes of the past and in discovering relations of cause and effect.

(g) The memory is aided and stimulated by the increase in the number of the centres of interest round which facts, both new and old, may be grouped.

(h) A knowledge of the facts and inferences of history is invaluable for general reading and culture.

To sum up: It is important that the good citizen should know his physical environment; it is just as important for him "to know his social and political environment, to have some appreciation of the nature of the state and society, some sense of the duties and responsibilities of citizenship, some capacity in dealing with political and governmental questions, something of the broad and tolerant spirit which is bred by the study of past times and conditions."

The ideal course in history would include (1) a general view of the history of the world, giving the pupil knowledge enough to provide the proper setting for the history of his own country; (2) a more detailed knowledge of the whole history of his own country; (3) and a special knowledge of certain outstanding periods or tendencies in that history. In our schools, we should give most attention to the study of Canadian and British history as a whole, to enough of the history of France and other countries to make clear certain parts of our own history, and to certain important periods, such as the settlement of Upper Canada by the United Empire Loyalists, etc. (See Detailed Course of Study, p. .) We may also study our history along special lines of development—political, military, social, educational, religious, industrial, and commercial—but these phases are subjects of study rather for secondary schools and colleges.

There are three stages in the study of history which, though they overlap each other, yet indicate different methods of treatment for pupils at different ages. They are the Story stage, the Information stage, and the Reflective stage....