Only an Irish Girl 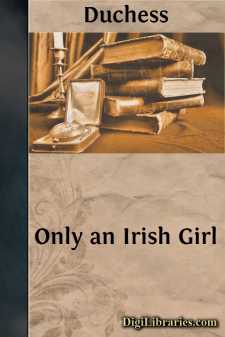 "And was it only a dream, Aileen?"

"Only a dream, miss, but it consarned me greatly. Shure an' I never had the taste of a sweet sound sleep since I dramed it!"

"You dear silly old thing to bother your head about a dream! It will be time enough to fret when we've something real to fret about."

"Ah, mavourneen, may yez never see that day!" nurse Walsh murmurs with passionate fondness, as she takes the girl's hand between her own broad palms and presses and fondles it. "Shure it's like yesterday—I mind it so well—that yer mother, as she lay dying beyant there, in her big grand bedroom at Donaghmore, said to me, as I stood beside her with you, a wee thing, in my arms, 'Ye'll be a mother to my little one, Aileen, and guard her from all harm, as I would have done.' And I knelt down then and there, and took my solemn oath; and from that day to this it's the wan bit of sunshine in a cloudy world ye've been to me, alanna!"

Tears come into the girl's eyes. There is a sad feeling in her heart this evening, as she stands in the little cottage, and looks across the bog at the long fields of corn beyond the river; and at this mention of her dead mother—the fragile mother whom she has never seen—the feeling grows into passionate pain and longing.

"He's a mighty fine gintleman and a man of manes—I'm not denying it, darlint—but he's not the man for you. Take an old woman's advice, mavourneen! He's black of face and of heart. He's come of a race that ground the poor and raised the rints, and sent poor mothers and old men and babies on to the highway to die of hunger and cold and heart-wretchedness!"

"But Power has done none of these things," the girl says warmly.

"His father and his father's father have done them; and haven't we the word of the Holy Book for it—the sins of the fathers shall be visited on the children to the fourth generation?"

Honor shudders, and her pretty color fades. Is she thinking of the sins of the dead-and-gone Blakes, some of which she may yet have to suffer for?

"I must go now, Aileen; the boys will be home by this time. And when I bring this fine Englishman to see you—he is only half an Englishman after all, for his mother was one of the Blakes of Derry—you'll give him a welcome?"

"That I will, asthore, though it's little the welcome of an old woman will be to him while he has your swate face to look on."

The girl laughs and gathers her fur cape about her as she steps out on to the bog road, for a keen wind blows from the mountains. As she turns to leave the cottage, a man, who has been smoking in the shelter of one of the heaps of turf, straightens himself and walks after her. His steps fall noiselessly on the peaty soil; but some instinct makes Honor turn her head, and at sight of him her face flushes.

"Ah, what brings you here, Power? I thought you were away at Drum withLaunce?"

"I went part of the way but turned back. Sure they'd nothing better to do!...