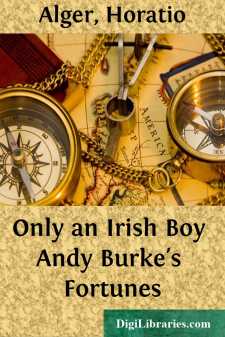 "John, saddle my horse, and bring him around to the door."

The speaker was a boy of fifteen, handsomely dressed, and, to judge from his air and tone, a person of considerable consequence, in his own opinion, at least. The person addressed was employed in the stable of his father, Colonel Anthony Preston, and so inferior in social condition that Master Godfrey always addressed him in imperious tones.

John looked up and answered, respectfully:

"Master Godfrey, your horse is sick of the disease, and your father left orders that he wasn't to go out on no account."

"Maybe it's yours, but your father paid for him."

"None of your impudence, John," answered Godfrey, angrily. "Am I master, or are you, I should like to know!"

"Neither, I'm thinking," said John, with a twinkle in his eye. "It's your father that's the master."

"I'm master of the horse, anyway, so saddle him at once."

"The colonel would blame me," objected John.

"If you don't, I'll report you and get you dismissed."

"I'll take the risk, Master Godfrey," said the servant, good-humoredly. "The colonel won't be so unreasonable as to send me away for obeying his own orders."

Here John was right, and Godfrey knew it, and this vexed him the more. He had an inordinate opinion of himself and his own consequence, and felt humiliated at being disobeyed by a servant, without being able to punish him for his audacity. This feeling was increased by the presence of a third party, who was standing just outside the fence.

As this third party is our hero, I must take a separate paragraph to describe him. He was about the age of Godfrey, possibly a little shorter and stouter. He had a freckled face, full of good humor, but at the same time resolute and determined. He appeared to be one who had a will of his own, but not inclined to interfere with others, though ready to stand up for his own rights. In dress he compared very unfavorably with the young aristocrat, who was biting his lips with vexation. In fact, though he is my hero, his dress was far from heroic. He had no vest, and his coat was ragged, as well as his pants. He had on a pair of shoes two or three times too large for him. They had not been made to order, but had been given him by a gentleman of nearly double his size, and fitted him too much. He wore a straw hat, for it was summer, but the brim was semi-detached, and a part of his brown hair found its way through it.

Now Godfrey was just in the mood for picking a quarrel with somebody, and as there was no excuse for quarreling any further with John, he was rather glad to pitch into the young stranger.

"Who are you?" he demanded, in his usual imperious tone, and with a contraction of the brow.

"Only an Irish boy!" answered the other, with a droll look and a slight brogue.

"Then what business have you leaning against my fence?" again demandedGodfrey, imperiously.

"Shure, I didn't know it was your fence."

"Then you know now. Quit leaning against it."