One Thousand Secrets of Wise and Rich Men Revealed

by C. A. Bogardus 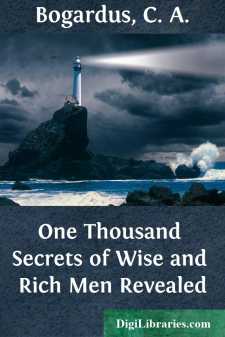 Agesilaus, king of Sparta, being asked what things he thought most proper for boys to learn, replied: "Those things which they should practice when they become men." His reply was in perfect harmony with the good judgment of mankind, and cannot fail to be appreciated by all who have good common sense. If Agesilaus lived at the present time, the question would most probably have included both boys and girls, and undoubtedly his reply would be so worded as to apply to men and women.

Mankind, especially of the United States, has two great duties. First, that of self-support and education. Second, that of governmental support and national enlightenment. While I have thus divided man's responsibility in two parts, it might not be improper to obliviate the dividing line and say that man's duties are all under one comprehensive head, viz.: "Mankind's duty is to man." However, in the preparation of this volume the dividing line is recognized and two general departments are presented; that of domestic or household economy, and national or political economy. The former department is a compilation of useful household formulas so arranged and worded as to form a neat and concise household receipt book. Frequent reference to its pages will impart such information as will enable the reader to save money and at the same time enjoy life.

Department number two treats on social questions that are now knocking at humanity's intellectual threshold for admission and solution.

Records show that less than one-thirtieth part of the time of man in general is consumed in productive pursuits, yet some people toil diligently three-fifths of their time and receive only a scanty living. To assist in making clear the road to private and national prosperity is therefore the motive which actuates me in the publication of this book.

From the time I was twelve years old I was considered a very fine shot with a rifle, although I did but very little shooting, and, in fact, did not know that I was any more than a common marksman; yet in any contests while a boy I always won.

One day in June, 1884, while passing a shooting gallery, my friends called me in for a match to pay for shots: I beat them all shooting, my score was 11 consecutive bull's eyes, while none of my friends had made half that score. The boys said I did well, to which I jestingly remarked that "that was common shooting for me; just throw up an apple and I will hit it." The apple was thrown up, and I hit it, which was as much of a surprise to me as it was to any of the rest. I then borrowed a 22-calibre Stevens rifle and practiced shooting at objects thrown in the air, first shooting at tomato cans, afterwards at smaller objects, and finally at marbles and various other small objects. By practicing half an hour a day, within a month I could hit 70 per cent of the glass balls which were thrown in the air. On July 4, 1884, I shot a match with James Robinson, at Pratt, Kansas; conditions, 10 glass balls each at 21 foot rise, he using a shot gun, I a rifle; I lost with a score of 4 to 6. This is the only match I ever lost with a rifle against a shot gun. The trouble with me was, this being my first match, I was thinking more about the stake money than the shooting. Besides the stake money which I lost, I had to treat all the boys who attended the match; they all laughed and had a good time at my expense.

The next day after my shoot with Robinson, I sent to P....