On the Significance of Science and Art 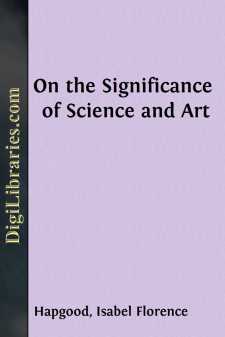 . . . The justification of all persons who have freed themselves from toil is now founded on experimental, positive science.  The scientific theory is as follows:—

“For the study of the laws of life of human societies, there exists but one indubitable method,—the positive, experimental, critical method

“One of the chief of these laws is the variation of destination among the portions of the organs.  Some people command, others obey.  If some have in superabundance, and others in want, this arises not from the will of God, not because the empire is a form of manifestation of personality, but because in societies, as in organisms, division of labor becomes indispensable for life as a whole.  Some people perform the muscular labor in societies; others, the mental labor.”

Upon this doctrine is founded the prevailing justification of our time.

Not long ago, their reigned in the learned, cultivated world, a moral philosophy, according to which it appeared that every thing which exists is reasonable; that there is no such thing as evil or good; and that it is unnecessary for man to war against evil, but that it is only necessary for him to display intelligence,—one man in the military service, another in the judicial, another on the violin.  There have been many and varied expressions of human wisdom, and these phenomena were known to the men of the nineteenth century.  The wisdom of Rousseau and of Lessing, and Spinoza and Bruno, and all the wisdom of antiquity; but no one man’s wisdom overrode the crowd.  It was impossible to say even this,—that Hegel’s success was the result of the symmetry of this theory.  There were other equally symmetrical theories,—those of Descartes, Leibnitz, Fichte, Schopenhauer.  There was but one reason why this doctrine won for itself, for a season, the belief of the whole world; and this reason was, that the deductions of that philosophy winked at people’s weaknesses.  These deductions were summed up in this,—that every thing was reasonable, every thing good; and that no one was to blame.

When I began my career, Hegelianism was the foundation of every thing.  It was floating in the air; it was expressed in newspaper and periodical articles, in historical and judicial lectures, in novels, in treatises, in art, in sermons, in conversation.  The man who was not acquainted with Hegal had no right to speak.  Any one who desired to understand the truth studied Hegel.  Every thing rested on him.  And all at once the forties passed, and there was nothing left of him.  There was not even a hint of him, any more than if he had never existed.  And the most amazing thing of all was, that Hegelianism did not fall because some one overthrew it or destroyed it.  No!  It was the same then as now, but all at once it appeared that it was of no use whatever to the learned and cultivated world....